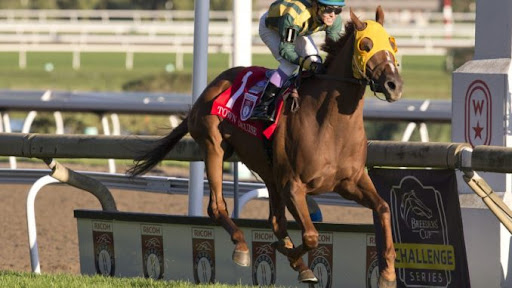 Welcome and greetings to all! As the racing season begins to draw to a close with many top tier horses pointing towards the Breeder's Cup, there are still excellent wagering opportunities for those willing to expand their search. Woodbine has a great betting card on Saturday, highlighted by the Grade 1 E.P. Taylor Stakes. While that race is full of extremely talented horses, I do believe one of the shorter prices will ultimately prevail in that affair. Therefore, we are going to take a look at the other featured race on the Woodbine card, the Grade 2 Nearctic Stakes going six furlongs on the turf.

The morning line favorite for this race is #9 Town Cruise. Town Cruise was an impressive winner of the Woodbine Mile last out. However, he seems to be a speed horse who has markedly improved since stretching out to a route. He has not sprinted in over a year, and his last effort going this short ended in a disappointing fourth place finish. Town Cruise has ample talent, but it's extremely unlikely that he will get the loose on the lead trip he received in the Woodbine Mile, as this race has legitimate sprinters entered such as Momos and Jolie Olympica who should keep things honest on the front end. Town Cruise can win, but he's a poor wager at 2/1.

I believe this race will be won by an off the pace runner, and two horses in particular stand out. #4 White Flag is a true veteran, but he's had issues staying on the track over the years. He ran a big race last out when making his first start off of the year layoff and winning impressively. It's encouraging to see Wilson stay aboard, and White Flag is one of the true six furlong turf sprint specialists in this field. He should get an honest pace and will be coming on strong late.

The other horse I am interested in is #5 Avie's Flatter. Perhaps there is more to this story than meets the eye, but it seems blatantly obvious to me that Avie's Flatter is a sprinter who has been running at the wrong distances most of his career. He is a completely different horse when running in sprints, and he is already proven to love winning at the seven furlong distance. Six furlongs is a bit of an unknown for him, but I believe the cutback will do him a world of good. He should sit a comfortable stalking trip against a swift pace and get first run on the deep closers.

#1 Admiralty Pier showed a new dimension when closing from off the pace last out. It appears he will need to rate again today given the speed to his outside. He is a contender here, but it is concerning to back him without knowing the rider's intentions to send or rate. Olympic Runner is a nice miler, but this feels much too sharp for him. Jolie Olympica could make noise against these if she shows up with her best, but she totally failed to fire last out and hasn't been the same since leaving the Mandella barn.

In summary, Town Cruise is vulnerable at the shorter trip while likely having to concede the lead to Momos. White Flag and Avie's Flatter are the most likely winners, with Admiralty Pier acting as a price-dependent wildcard.