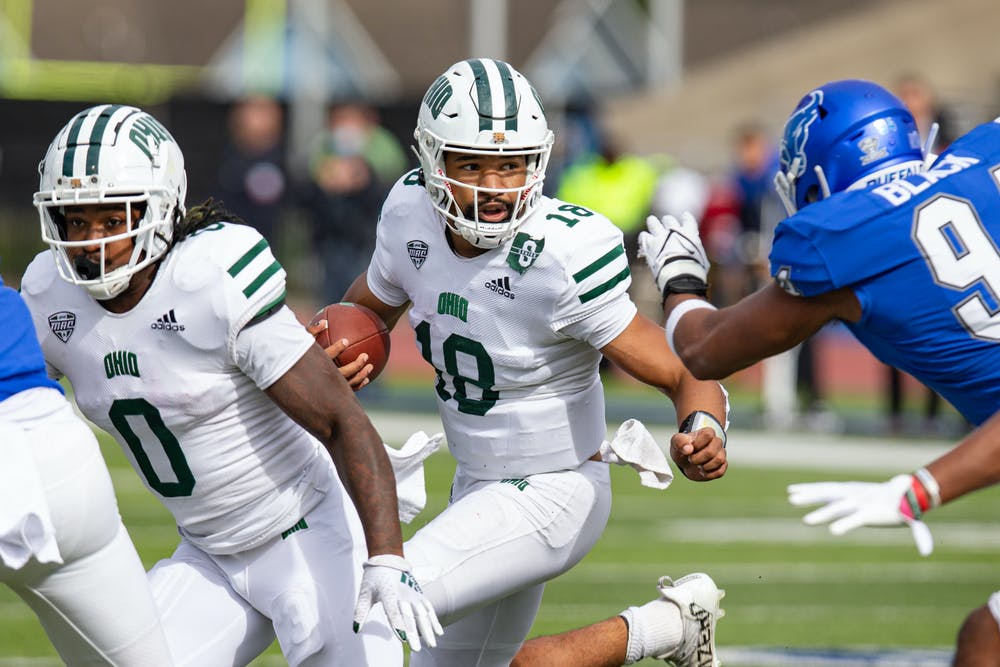 Head Coach Tim Albin and the Ohio Bobcats struggled early in the season, but they’re performing better in recent games. After an 0-4 start, including an embarrassing loss to Duquesne, Ohio’s posted a 1-2 record. They performed better than expected in each of their last 3 games, though, beating Akron, while losing to Central Michigan and Buffalo by a total of 4 points.

Head Coach Sean Lewis frontloaded the Kent State Golden Flashes schedule. Outside of an easy win against VMI, Kent State started their season with losses to Texas A&M, Iowa, and Maryland. Since then, they’ve beaten Bowling Green and Buffalo before losing to Western Michigan by 33 points.

Will Kent State’s tough early-season tests prove to help them later in the season? Or will Ohio continue their recent string of close games?

Kent State’s also struggled ATS in 2021, recording a 2-5 record through 7 games. They own an average margin of victory of -5.9 points. They’ve also posted an ATS +/- of -1.6. Kent State’s numbers are off a bit by a massive victory over VMI. They were -18.5 point favorites in that game, ultimately winning by 50.

The key to this game is relatively simple. Who can control the game with their rushing attack? Ohio ranks 20th in the NCAA, running the ball on 61.2% of their plays in 2021. Kent State isn’t far behind, as they feature their run game on 56.4% of their plays this season. Both teams are going to look to establish the run, and whoever does that better will have a massive advantage in this game.

Ohio boasts one of the best rushing offenses in the NFL, ranking ninth in the country in yards per carry (5.6). Overall, they’re averaging 212.2 rushing yards per game, which ranks 21st in the country this season. Even in their big losses, Ohio’s found some rushing success. They simply weren’t able to focus on it because they were forced to throw the ball.

Kent State features one of the worst run defenses, ranking 120th in the NCAA in yards per carry allowed (5.7). They’re also allowing 226.8 rushing yards per game, which ranks 119th in the country.

The Golden Flashes unsurprisingly struggled to defend the run against some of the top teams in the nation. With that being said, they also struggled against Bowling Green, Buffalo, and Western Michigan. The only team they truly found any success against was VMI, suggesting they’ll continue to struggle against one of the nation's best rushing offenses in Ohio.

With that being said, Kent State has the ability to control this game with their rushing offense, as well. They only rank 72nd in the NCAA in yards per carry (4.0) and 47th in rushing yards per game (177.8). A large portion of those yards (494) came against VMI, although it’s impossible to overstate how difficult their early-season matchups were outside of this game.

More importantly, Ohio features one of the worst run defenses in the NCAA. They’re giving up 5.5 yards per carry and 238.3 rushing yards per game, which both rank outside of the top 115 in the country. Even in some of their easiest matchups, Ohio struggled a bit against the run. They did flash at times against Duquesne and Akron, although it’s impossible to trust their run defense.

Ultimately, I slightly favor Ohio’s run offense in this matchup. The other key to this game is where it takes place.

Kent State’s been terrible on the road, where they’re allowing 6.3 yards per carry this season. It’s one of the highest rates in the NCAA. It’s important to note that 3 of their road games came against Texas A&M, Iowa, and Maryland, which could skew the stats a bit.

With that being said, the Golden Flashes also lost by 33 points on the road to Western Michigan. They allowed 341 yards and 5 touchdowns on 51 carries in that game. Ultimately, I don’t expect Kent State to all of the sudden be able to travel well in this game.

On the other side, Ohio’s quietly struggled at home. They averaged over 4.0 yards per carry in a tougher matchup against Syracuse earlier this season in Ohio, though. The key to this game could be Armani Rogers, who adds another dimension to the Bobcats offense, as he’s one of their top rushing threats from the quarterback position.

He’s recently taken over at the quarterback position, and playing in front of his home crowd should benefit his gameplay.

This is a game between two teams that likely want to play the same way. I prefer the home underdog with a versatile rushing attack, though. I don’t expect Kent State to be able to slow their offense down, allowing them to stick around this weekend.

I’m backing the +5.5 point underdog, and I believe they have a chance to win this game outright.