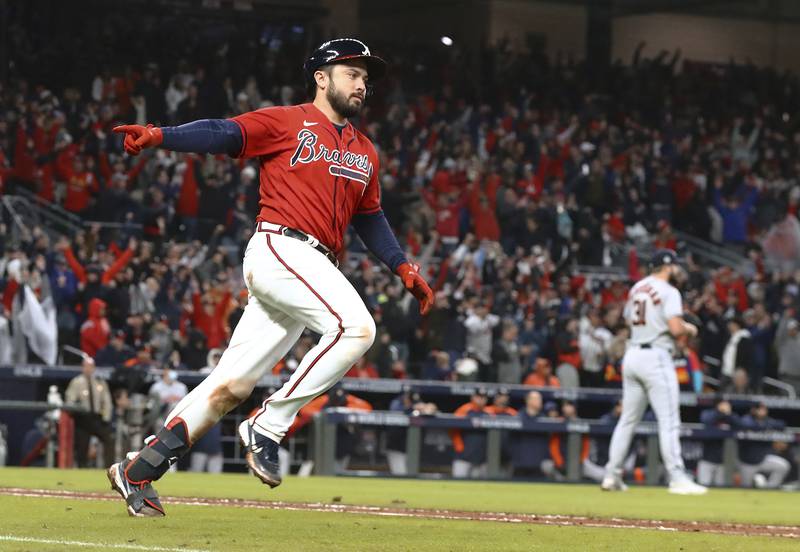 I love baseball, but I hated Game 3. Not only did we get destroyed by taking the over 8.5, but we also only saw a combined eight hits. Houston made Anderson & the bullpen look impeccable taking a no hitter into the eighth inning.

Tonight, Game 4 appears to be a conglomerate of bullpens. With a lead in the series, Atlanta will take their chances and start a rookie southpaw, Dylan Lee. Houston is starting veteran, Zack Greinke.

Greinke has started in one game this postseason and played in two. Small sample size, but in 2.1 IP he allowed three hits, two earned runs, one homerun, three walks, and a 7.71 ERA. Something that I find concerning are his splits. Greinke allows a respectable .565 OPS against left-handed batters, but against righties he is allowing .828 OPS. Greinke’s last thirty-day trends show an increase in ground ball %, great increase in hard hit %, decrease in k%, and an increase in bb%. He is really starting to utilize his changeup; however, Atlanta was the best against changeups this season. I do believe Greinke will have a short leash due to Houston being down in the series.

Lee has yet to start this postseason but has relieved in two games. Another small sample size, but in 2.2 IP he allowed three hits, one earned run, one homerun, three strikeouts, and a 3.38 ERA. His main pitches are fastball, changeup, and curveball. Houston was top ten this season against all three pitches. With such a small sample size it is hard to rely on it, but this season he is allowing left-handed batters a .400 wOBA and a .371 wOBA to right-handed batters. I expect Lee to have a short leash but not as short as Greinke’s.

Houston is Jekyll and Hyde right now, so which one are we going to see tonight? I like to think that with Houston’s success against southpaws this season their bats should wake up. I do show possible rain showers leading up to the game, but I do not see it raining during the game. Wind is blowing out to left center at around 10 mph.

The game total has already moved to 9 since opening at 8.5 and I think it is due to the starting pitchers. I see an opportunity for Houston to bounce back, but I also think Atlanta can torture Greinke. This season Atlanta is averaging 3.01 runs in F5 at home. On the opposite side, Houston is averaging 2.90 runs in F5 on the road. I said it last time so why not double down; I see both starters struggling.