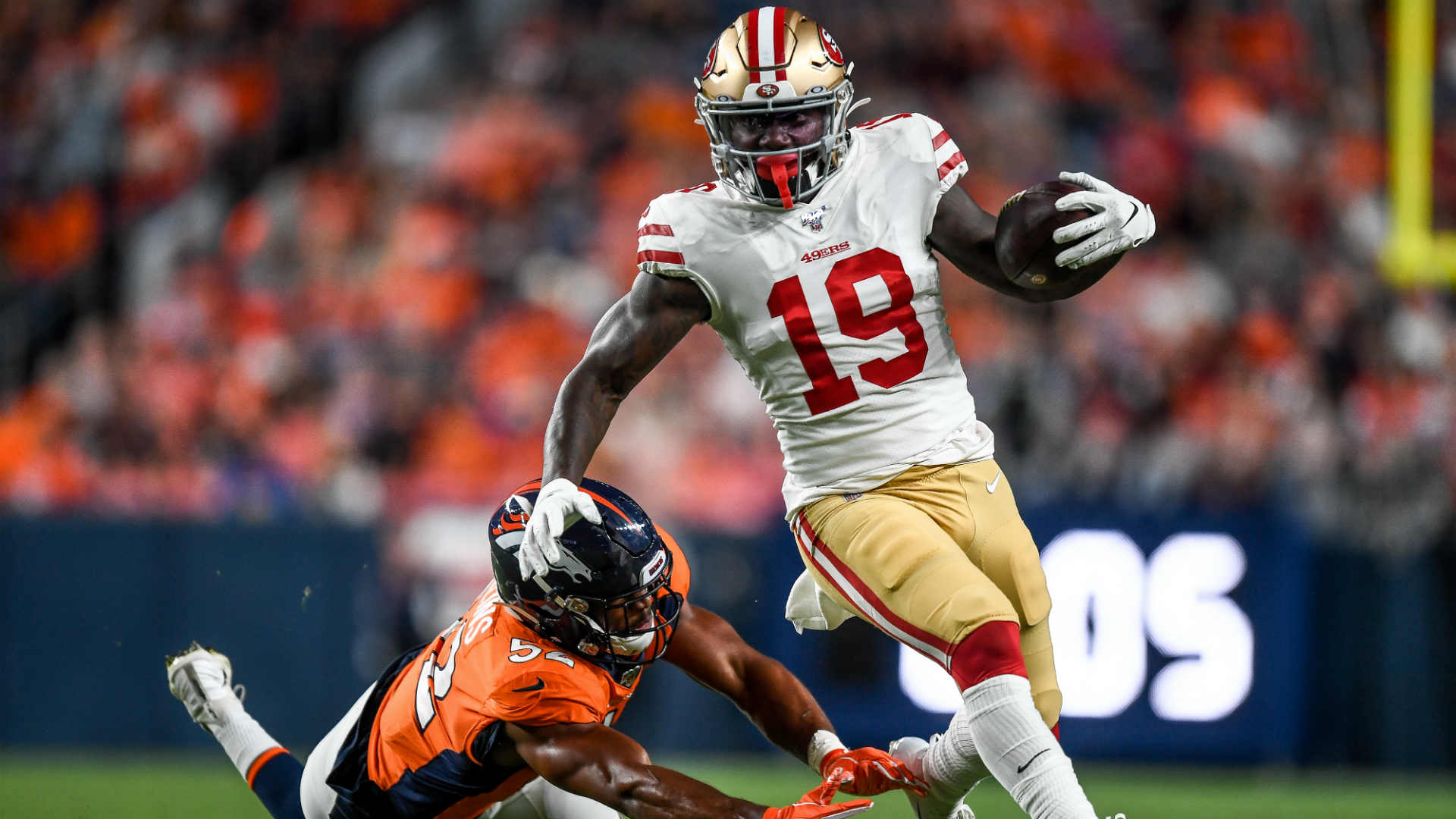 The San Francisco 49ers will host the Los Angeles Rams at  Levi’s Stadium in an NFC West showdown on Monday Night Football. San Francisco’s struggled this season, posting a 3-5 record with a -17 point differential. Three of their 5 losses have come by a touchdown or less, though. Los Angeles’ found more success, as they enter this game with a 7-2 record to go along with a +65 point differential. Their only losses have come from the Arizona Cardinals and Tennessee Titans, while they own impressive wins over the Indianapolis Colts, Tampa Bay Bucs, and Seattle Seahawks.

The odds in this game are as one would expect, as the Rams are -3.5 point favorites, although the line’s shifted toward the 49ers thus far. The game total opened at 49.5 points, dropping to 49 throughout the week.

Deebo Samuel performed well as a rookie, posting 57 receptions for 802 yards and 3 touchdowns on 81 targets. He took a step back during his sophomore season, dealing with injuries. He played in only 7 games in 2020, recording 33 receptions for 391 yards and 1 touchdown on 44 targets.

Samuel’s overtaken Brandon Aiyuk as the WR1 for San Francisco as he continues to breakout during his third year in the NFL. Through 8 games, he boasts 49 receptions for 882 yards and 4 touchdowns on 81 targets. Samuel’s posted over 100 yards in 4 of his 8 games in 2021. He fell short of this mark with 93 yards against the Philadelphia Eagles, as well.

Samuel gets an interesting matchup against Los Angeles this weekend. They’ve been an average pass defense, allowing 248.7 passing yards per game. They’ve only allowed 6.0 adjusted yards per attempt, though, suggesting they’ve performed well on the volume they’ve faced. They’ve also only given up 10 passing touchdowns with a 2.9% passing touchdown rate.

The Rams blitz at one of the higher rates (28.8%) in the NFL, though. Even with that, they rank near the bottom of the league in quarterback knockdown rate (5.6%) and pressure rate (22.5%). Their blitz tendencies often put other defenders in one-on-one matchups, allowing opposing players to record plenty of yards after the catch when they miss tackles.

Los Angeles’ given up a league-high 1,251 yards after the catch this season. There are 6 defenses in the NFL to give up more than 1,200 YAC in 2021, although Los Angeles also leads that group with 1,201 air yards allowed.

The Rams have flashed as a defense at times, although they’ve also struggled with receivers that have YAC ability. Kalif Raymond posted 6 receptions for 115 yards against Los Angeles only 3 weeks ago. They’ve also given up big games to DK Metcalf, Mike Evans, and Michael Pittman this season.

Between his ability to create separation before and after the catch, this is an ideal matchup for Samuel to find success.

The 49er’s offense is getting a bit more crowded as Brandon Aiyuk’s role is growing and George Kittle returned last week. Still, I don’t expect Samuel to be the odd man out moving forward. He’s playing too well as the top option for San Francisco to move away from him.

Los Angeles is the favorite in this game, suggesting the 49ers could be throwing from the start to the finish. Samuel has the skillset to give the Rams defensive backs issues in multiple levels of the field, and I’m expecting him to find success once again this weekend.