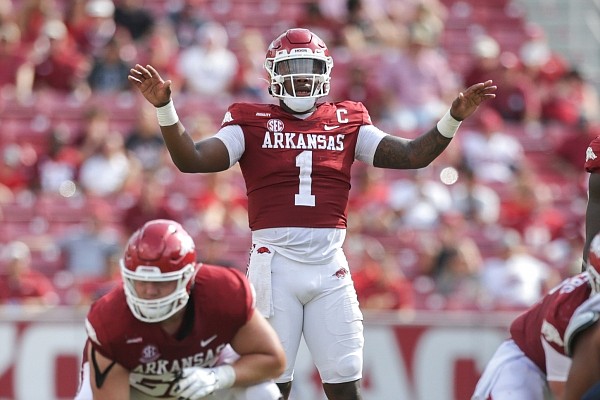 Another week of College Football is upon us and we are inching closer to the College Football Playoffs. This weekend we are treated with a top-10 matchup between #7 Michigan State and #4 Ohio State. While it’s the destination for College Gameday the oddmakers don’t think it will be much of a game, as Ohio State is currently an 18-point favorite. Nonetheless, we are turning our attention to another game. With the SEC Championship in their scope, we look at the Alabama Crimson Tide who host the Arkansas Razorbacks.

When combing through the college football slate, as when I landed on this game a tear began to roll down my face. As a Bama guy, I never want to bet against my own squad, but here we are. The bet I am interested in is Arkansas +21 (-115). While Alabama have been playing very well the past few games, much of this bet has to do with KJ Jefferson and the Razorbacks.

6’3 sophomore Jefferson has been the answer the Razorbacks have been looking for. He is having a great season with 22 total touchdowns and just three interceptions. He size and decision making keeps Arkansas competitive in any game. Outside of the 37-0 beatdown they suffered from Georgia; they have been competitive in every game they have played this season.

Arkansas has excelled as an underdog this season. Their lone ATS loss as a dog this season was at the hands of Georgia. Alabama will likely win this game, but their defense at times has their question marks. Will Anderson is the player I am most afraid of as an Arkansas backer. If he’s able to live in the backfield it could be a tough, ask from the Razorbacks to stay competitive.

Yet, I still like Arkansas here. This is not the 2020 Alabama team. Their inability to affectively run the ball at times this season has allowed teams to pin their ears back and blitz. There were early questions about the Arkansas run defense, but since the Ole Miss game they have not allowed a team over 138 rushing yards. Look for them to have enough offense to keep this inside 20. Bet one unit on Arkansas +21 (-110).