2022 NCAA Basketball Champion - Who Can Really Win It This Year?

Who can actually win the NCAA Basketball Championship this year?  Some people think only the 1-seeds can.  Others will say there are 20 teams than can win it all.  I disagree with both.

Over the last 20 tournaments there are key statistical trends to pay attention to.  All but one champion has finished the season in the top 20 for both offensive and defensive efficiency ratings (per KenPom).  The lone exception was Connecticut in 2014 (not the Kemba Walker UConn team, but the Shabazz Napier one).  There are only a handful of teams that fit those perameters this season:
- Gonzaga
- Arizona
- Baylor
- UCLA
- Houston

It is worth noting another few teams that lay right on the edge of the cutoff, and a winning tournament run would definitely land them inside the top 20 efficiency on both sides of the ball:
- Kentucky
- Kansas
- Auburn
- Villanova

So those are the nine teams I believe can actually win the NCAA Championship, from a statistical perspective.  From an eye test, I would create a short list by removing a few teams.  Baylor's injuries hurt their ceiling and their reliability - Jonathan Tchamba Tchatchoua was the anchor of their interior defense, and LJ Cryer was the team's leading scorer and best three point shooter.  UCLA's offense relies heavily on mid-range jump shots - the least efficient shot in the sport.  Houston has a 5-seed and thus a difficult path, and they're horrible from the free throw line.  Auburn is a poor three point shooting team and I simply do not trust their point guard.

So that leaves 5 teams that I believe could actually win it all.  Three of them happen to be Final Four teams in my bracket.  Here is my bracket, followed by an explanation why each of those three teams could win it all. 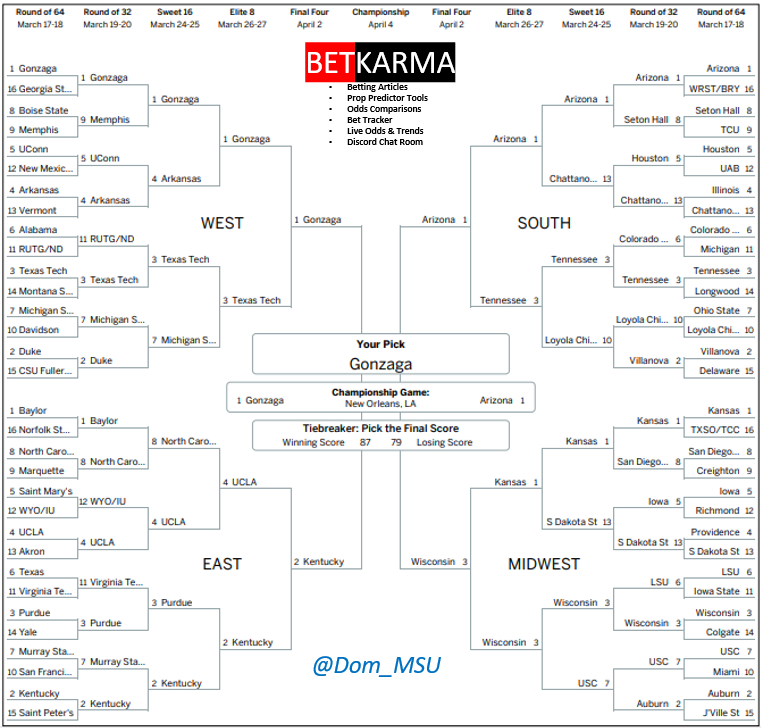 When Gonzaga finished last season with a 31-1 record after losing to Baylor in the championship game, Drew Timme said he would be back to finish what they started.  I believe the Mustache Man.  This season's team isn't as dominant as last season's undefeated team (obviously), but I think there's a case to be made that this team is more talented.  Future NBA lottery pick Chet Holmgren is the rim protector Gonzaga has been missing.  He's having an Anthony Davis type season... Do you remember what Anthony Davis' Kentucky team did?  Yep, they won it all.  This Gonzaga team is elite on both sides of the ball, they have experience, talent, size, and a great point guard.  They even have two McDonald's All American guards coming off the bench, so how's that for talent AND depth?

And please, can we stop the false narrative that "Gonzaga doesn't play anyone so they always choke in March"?  That's simply not true at all.  Gonzaga has been to the national championship game in two of the past four tournaments.  That's incredible!  They even held the lead over North Carolina with less than two minutes to play in the 2017 national championship.  When they're not making national title games, the Zags are making Sweet Sixteens and Elite Eights (two of each in the past six tournaments).  The Zags have more NCAA Tournament wins than ANY other team in the country since 2013.  This season, Gonzaga beat UCLA, Texas Tech and Texas all by double digits.  They lost to Duke by 3 in a coin flip ending.  They are for real, and they are out to finish the job à la 2017 North Carolina.

I believe in Gonzaga as a powerhouse program so much, that when 20-year assistant Tommy Lloyd left Spokane to take the head coaching job at Arizona I jumped on Arizona Final Four futures (15 to 1) and National Championship futures (70 to 1) back in November.  The Wildcats are 31-3 after rolling through the Pac 12 and have a non-conference win at Illinois and a narrow, foul-driven loss at Tennessee.  Arizona is statistically dominant, with top 10 ratings in both offensive and defensive effective field goal percentage.  They have a dominant, rim-protecting center in Christian Koloko and a future NBA lottery pick wing in Bennedict Mathurin.  However, the concern is around point guard play, which is crucial in March Madness.  Second-year Kerr Kriisa has done a fine job running point all season, but in the Pac 12 tournament he suffered a rolled ankle and posted this gross picture of his bruised ankle on his Twitter.  Hopefully he makes it back for their second round game.  Though, I'm no doctor, but that picture looks brutal.

Kentucky is a two seed, but from my perspective they are a top three team in the country.  Big Man Oscar Tshiebwe is the best rebounder in the country and is likely to win a National Player of the Year award.  TyTy Washington and Sahvir Wheeler make up an elite point guard duo that we've seen so many national championship teams have.  Kentucky battled injuries yet still finished second in a stacked SEC.  Outside the conference, UK has shown up in big games this year, routing North Carolina by 29 in Las Vegas and beating Kansas by 18 in Allen Fieldhouse - where Kansas was otherwise undefeated this season.  Road games in college basketball are always tough, but I've always thought a Saturday road game is even tougher.  Kentucky played a brutal schedule with more tough Saturday road games than any team in the tournament.  Cal's Cats fought through a schedule including road Saturday games at Kansas, Auburn, Arkansas, Alabama, Notre Dame, and Florida.  Talk about being battle tested.

All throughout the tournament you can keep track of your bets with BetKarma's new Bet Tracker! Connect your sports books and easily see and share all your wins, losses, and pending bets.