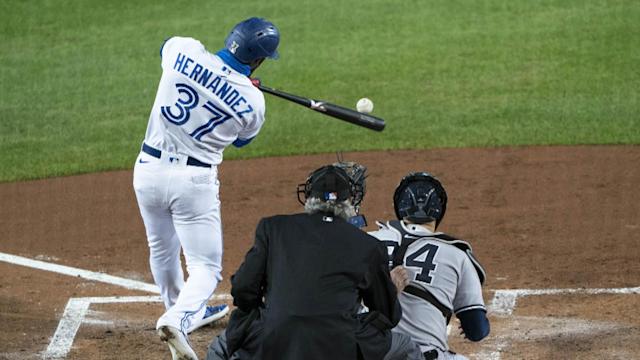 Monday had some unexpected upsets around the league. Detroit upset the Red Sox with Javy Baez’s late two-run homerun in the bottom eighth. Colorado had some late inning heroics where CJ Cron and Connor Joe each hit a homerun to propel them past Texas. The Orioles even got a win on their home opener.

Tuesday, we have four afternoon games, but I am zoning in on the night slate.

At the time of writing this article Toronto is currently throwing a two-hit shutout against the Yankees. The Blue Jays are off to a great start this season as are the Yankees.

Toronto will be throwing LHP Kikuchi. Kikuchi is a split pitcher. Last season he had a .478 OPS against left-handed batters but a .830 against right-handed batters. In the two games against the Yankees last season, he had a 4.50 ERA, allowed 12 hits, and a .286 OBA. His main pitches are fastball and cutter. However, his cutter allows a .401 wOBA and 18% whiff rate.

The Yankees will start a southpaw as well, Nestor Cortes. Cortes has had limited exposure to the Blue Jays last season. He only saw them one game where he had a 3.0 ERA, allowed two homeruns, five strikeouts, and a .261 OBA. Cortes has good control only allowing 6% walk rate. The unfortunate thing for Yankees fans is he is a major flyball pitcher with a 50% flyball rate.

I am not interested in either starter. Last year both teams were top ten against LHP. When it comes to bullpens, I am choosing the Yankees. Last year they had a 3.77 xFIP as opposed to Toronto’s 4.27.

Vegas has the Yankees as slight favorites. I think the deciding factor is Toronto’s success against LHP. I know the Yankees have success against lefties as well, but Cortes being a heavy flyball pitcher is just setting up George Springer, Teoscar Hernandez, and Vlad Guerrero Jr to have a big day.

Both these teams are all too familiar with one another. Last season the Giants edged out the series going 11-8 against the Padres.

The Padres will be throwing RHP Yu Darvish. Darvish saw the Giants four times last year and while he racked up a total of 29 strikeouts, he also allowed a 5.82 ERA. To make matters worse, he allowed seven homeruns. The main issue with Darvish is the 43.7% flyball rate and 38.5% hard hit percentage.

For the Giants we will see RHP Alex Cobb. Cobb did not get a chance to see the Padres last year. Last season he had an impressive 3.76 ERA and 1.26 WHIP. Cobb has a 52.6% ground ball rate. He also limits hard contact. Cobb does his best when at home. He had a 2.22 ERA at home last season as opposed to his 5.44 on the road.

Vegas set this game as a pick’em. While Darvish has had his struggles against the Giants, I think he bounces back and has a strong outing. The Padres bats are just too inconsistent to me, so I think Cobb deals fine against them. I think we see a pitching duel in this matchup.