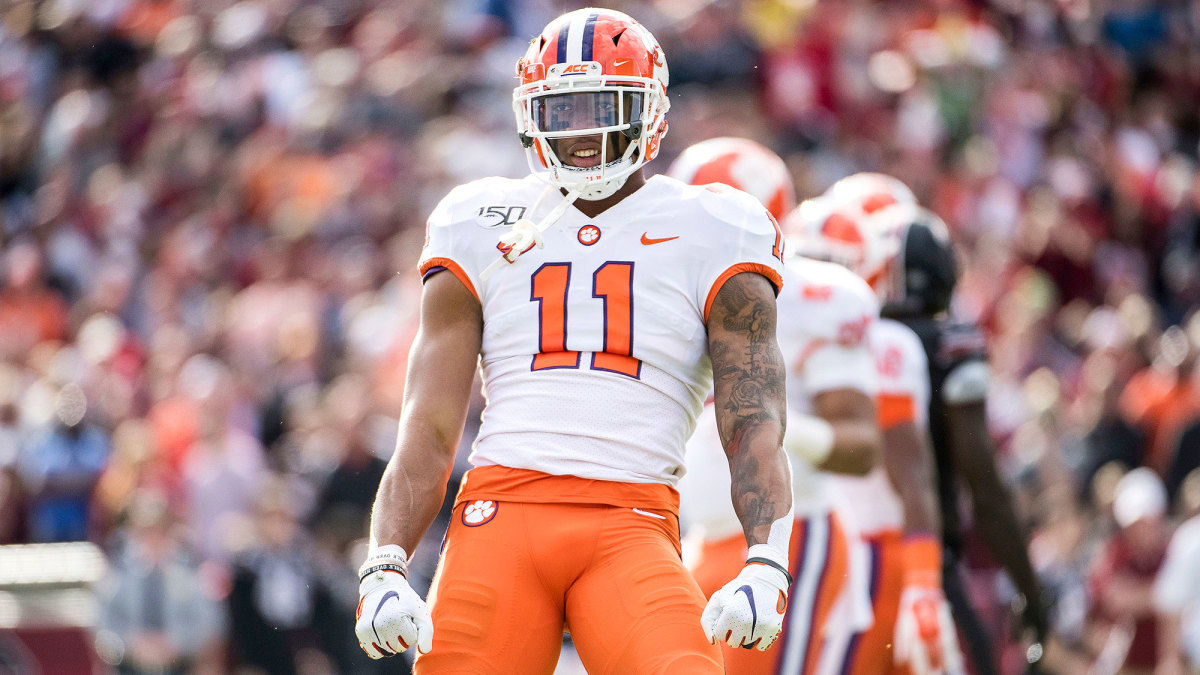 The NFL Draft is just around the corner, and sites are posting NFL Draft Props. This particular bet focuses on Isaiah Simmons. It can be found on MyBookie.

On the left side of the website, find “NFL Odds 2020 Draft.” Clicking this will open a dropdown menu. Select “NFL Draft Props 2020” for the list of available prop bets.

Simmons is the most versatile player in the 2020 NFL Draft. He played 100+ snaps at five defensive positions throughout his time at Clemson. Simmons dominated the 40-yard dash and vertical and broad jumps at the NFL Combine, further increasing his draft stock.

He’s a player that has the potential to find success at safety, linebacker, or slot cornerback in the NFL. Simmons is an outstanding tackler, who flashed tremendous football IQ, seamlessly shifting from position to position at Clemson. He can play sideline-to-sideline at linebacker. Simmons also flashed the ability to play in man or zone coverage during his time at the collegiate level. He has the potential to help an NFL team at multiple positions depending on their biggest needs on the defensive side of the ball.

Simmons isn’t a flawless prospect, though. He needs to work on his reads if he is going to play linebacker at the next level. He also struggled at times to get off of blocks at an efficient pace. These are relatively minor critiques, though, as Simmons is one of the top prospects in this draft.

The current prop for Isaiah Simmons is when he will be selected. The over/under is set at pick 6.5. The over boasts +160 odds, while the under sits at -210.

The odds are what gives this play life. If the over/under was set at 6.5, but the odds were even, this play wouldn’t have near the appeal as the +160 odds offer. These odds imply a probability of roughly 39%. In other words, Vegas expects Simmons to fall out of the top six picks only 39% of the time.

There are only a few situations that Simmons can be drafted in the top six of this draft, though. We know Joe Burrow will be the first overall pick. We can also assume that Chase Young will be selected prior to Simmons.

Let’s take a look at potential suitors for Simmons in the first six picks.

The Detroit Lions possess the third overall pick in the NFL Draft. It’s likely that they trade out of this spot, though. The likely pick will then be Tua Tagovailoa.

My most likely scenario results in the Miami Dolphins trading up for Tagovailoa. Detroit would then have the fifth overall selection. With that pick, I’d expect them to zero in on Jeff Okudah rather than Simmons.

Detroit has multiple positions to fill in this draft, but cornerback is significantly more pressing than linebacker (Simmons likely NFL position). I’d fully expect them to prioritize Okudah before Simmons.

The New York Giants sit at the fourth overall pick. They are the most likely option to select Simmons in the top six picks. They essentially have two ways to go - Simmons or an offensive tackle.

Simmons would add to a struggling defense, but teams often emphasize protecting their franchise quarterbacks. Daniel Jones flashed enough last season that New York should feel comfortable with him. They shouldn't feel comfortable with their offensive line, though. Nate Solder is aging, while the rest of their line has consistently struggled as a whole.

This draft is stacked with four outstanding offensive tackles. Selecting this early gives New York their pick of the group.

The Los Angeles Chargers are a fun team to add to this situation because Simmons would bolster an already versatile defense. The truth of the matter is they don’t need him.

Los Angeles is a relatively complete team, making it difficult to know where they are going to draft. They have one major hole, though - quarterback. Tyrod Taylor is penciled in as the starter, but he clearly isn’t the future.

Justin Herbert is the third quarterback option this draft, and some teams may be enamoured with his physical tools. Teams often overdraft quarterbacks, and Los Angeles is likely to be no exception.

Trades consistently happen in the NFL Draft. This year is likely to be no different, although the online format could play a role in teams wanting to keep their drafts as simple as possible.

There are teams right outside of the top six that could trade up for Simmons, though. The Carolina Panther with the seventh pick come to mind.

Teams aren’t overly likely to trade this far up in the draft for a linebacker, though. This may be a moot point if teams view him at a different position, though. Still, teams are significantly more likely to trade up for a quarterback than Simmons.

There are limitless scenarios that could happen, but the most likely one comes down to whether the New York Giants pass on Simmons or not. The other six picks are expected to be Burrow, Young, Okudah, Tagovailoa, and Herbert.

If this comes down to one team, do these odds make sense? No. The Giants, who are in need of offensive line help for their franchise quarterback, aren’t likely to select Simmons 61% of the time. This gives us odds value on a line that is set far too wide.