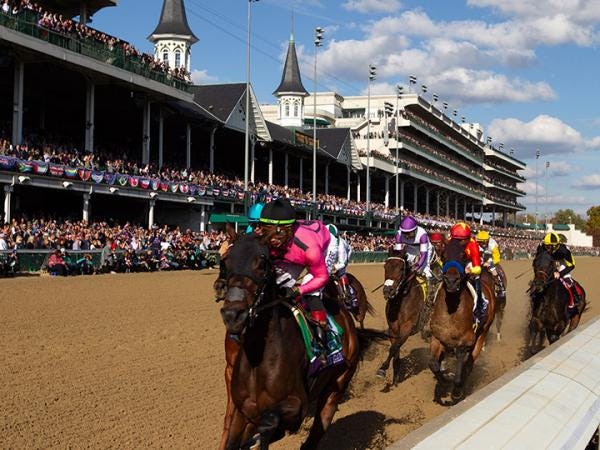 Welcome to Churchill Downs! Today we have a phenomenal race card, and while the attention will mostly be focused on the 3-year-old horses on the now extended Derby trail vying for points in the Grade 3 Matt Winn, the Blame stakes is shaping up to be one of the most competitive races of the day. With a full field of 14 horses set to take on the 1-mile event, this race is easily graded stakes caliber despite the official status. Let’s look at the contenders.

#3 Global Campaign was plagued by injuries throughout his 3-year-old season, which ultimately forced him off of the Derby trail. Connections gave him time off, and he responded with a visually dominant win an allowance race at Gulfstream park in a race that he likely wasn’t completely cranked up for. His last race is arguably strong enough to win today, and he has every right to improve in his second start off of the layoff. It’s also worth noting the substantial upgrade in the saddle from Landeros to Ortiz. #14 Diamond King was done no favors by the far outside draw, giving aggressive rider Carmouche few options other than to send hard for the lead. While there is some other speed here, I anticipate Diamond King will take them as far as he can on the front and just might be good enough to hold them off late. Upgrade if track is playing friendly to speed. #5 Everfast is a mere 1/16 in his career, but he looked like a new horse last out in his first start for the Sisterbarn barn where he flashed uncharacteristic early speed and was very game when losing by a neck to heavy Baffert favorite Dessman. Rosario takes the mount, who was aboard for the best race of his career in the Preakness. Don’t sell too short. The morning line favorite #8 Owendale doesn’t do much for me. His lack of early speed often leaves him with a ton of work to do late, and while he needs to be included for the bottom of exactas and trifectas, I won’t be using him on top.

#3 Global Campaign gets a chance to prove what he can do when healthy, and I believe he won’t disappoint here today. He gets the nod as the top selection. I’m not very interested in #3 Owendale, #13 Mr Money, or #6 Backyard Heaven, who are the other horses likely to take money, so I believe that the race could be ripe for a long shot. #14 Diamond King, #5 Everfast, #7 Silver Dust, and #9 Extrordinary Jerry all have a realistic shot at the upset.

Credit to Debra A. Roma for the photo