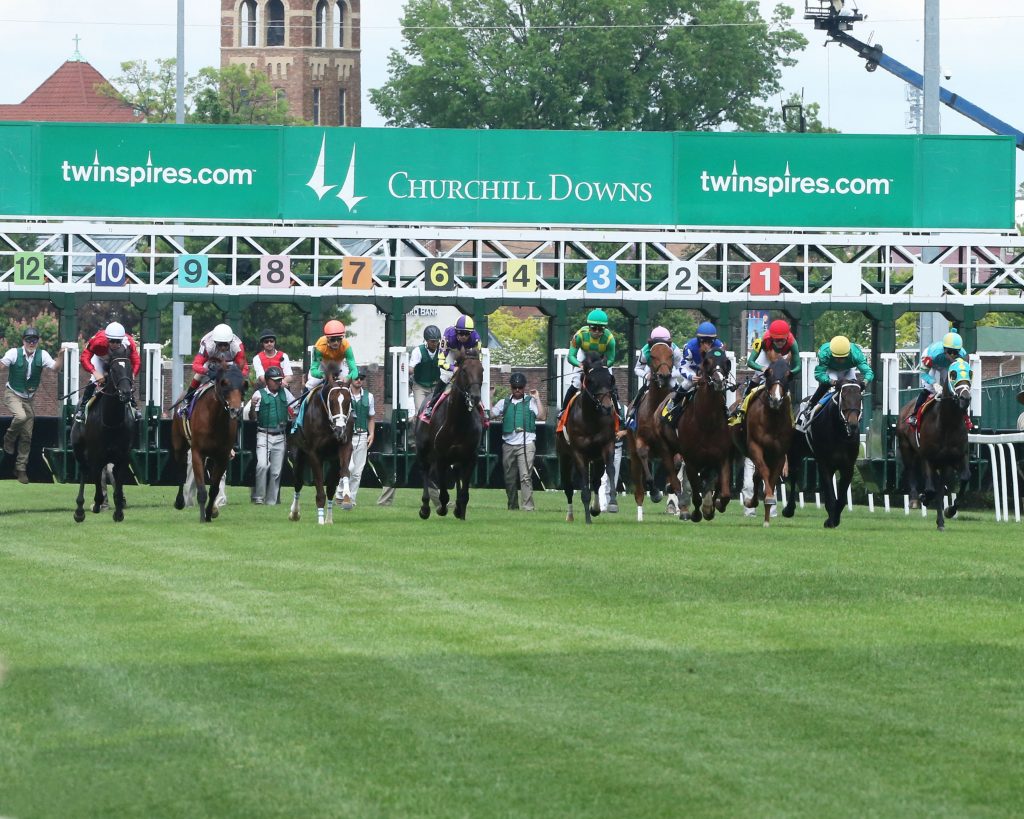 Welcome back to Churchill Downs! After a series of bombs came in during races 4-8 on Saturday, the middle Pick 5 was not hit and has a carryover of over $100,00 to Sunday’s late Pick 5! Let’s take a look at the sequence, starting in Race 6. I will highlight a few horses I find interesting in each race, but you’ll have to subscribe to the Premium Picks package for the exact plays!

The first race of the sequence is a doozy, a low-level maiden claiming event where very few of the runners have ever ran a competitive race. #8 Azlynn’s Dreamer has improved in each of her 3 lifetime starts, and she owns the best last out speed rating of this field. She moved a bit prematurely last out and was caught late, but with any step forward she is dangerous here. #4 Annie’sgoldengirl is one of the more promising first-time starters, as her sire Goldencents gets 17% debut winners and Correas is a respectable 15% with a positive ROI with first timers. #3 Zippy Ki Yay is bred for pure speed, and while the workouts in the morning suggest she may need a race, she’s one who may get overlooked in the betting. #6 Cavatica had a bit of trouble in her debut, and she now drops in class, adds blinkers, and stretches out in distance. Expect her to show more speed this time out. #11 Every Single Day feels like a vulnerable favorite, as she’s burned money in her last 3 races while never threatening the winner. Should #13 Cold Hearted Wench draw in via scratches, that one is very interesting, as her 2-year-old speed figure in September is nearly good enough to win here, so with any improvement she becomes a massive threat. Only 1 published work since September 2019 is concerning, but one has to think she’s been working at a private facility.

The going doesn’t get any easier in Race 7, as this race also lacks a clear standout. #5 K W Captain Flint broke his maiden in his debut going this trip on the dirt and then was switched to turf against foes probably a little too strong. A return to dirt and a drop in class could get this one back on track at a generous price. #9 Reelfoot took a while to break his maiden, but he put together two strong races before flopping last out. The track was playing kindly towards outside stalkers/closers on Saturday, so if that trend continues, he fits the right profile. #10 Connection is another who should get a nice tracking trip wide for the ever-dangerous combination of Hronis Racing and Sadler, but facing winners for the first time is never easy. #1 Yamano Maker will take money due to connections, but it’s uncharacteristic for Mott to wheel this one back in barely 2 weeks and for a large drop in claiming price. Have to wonder if something else is going on.

A third consecutive difficult race awaits, this time on the lawn. #2 Witez appears to be the horse to beat, as she is dropping out of graded stakes company and has a large class edge over this field. Her late run in the Jessamine was impressive, but she’s yet to repeat that effort. Perhaps in her third start as a 3-year-old she will take that next step forward here. #7 Secure Connection is another who drops from the graded stakes ranks, and she didn’t run as poorly in that effort as it appears. She was off a bit slow, then had to take up hard before going into the first turn. In a race where the horses who broke 1-2 ended up finishing 1-2, you can draw a line through this race. #12 Audrey’s Time was impressive in her maiden score, powering home to win by 2 lengths, and she never really had a chance to show what she could do in her next race. She was stuck behind a wall of horses and never truly set down, so there is potential upside here.

Race 9 gives a potential single for those on a budget, as #2 Royal Flag appeared absolutely dominant in both of her wins. A repeat of her last gets her the score here by a comfortable margin, but one has to wonder a bit that if she is truly as dominant as she appears, why wouldn’t Chad send this one to face graded stakes company? Regardless, she’s clearly the horse to beat, albeit at a short price. #7 Saracosa drops down from the clouds after facing the likes of Ce Ce, Ollies Candy, Lady Apply, Street Band, and Serengeti Empress in her last 3 races, and she meets no such foes here. Hard-trying mare is always coming strong late, and there appears to be enough pace signed on for her to have an honest shot. #1A Final Cut ran her career best race over this course in November going a taxing 9 furlongs, but she hasn’t shown that same form so far as a 4-year-old. Perhaps she didn’t care for the 1-turn mile configuration at Gulfstream, so a return to Churchill with 2 turns and an extra 1/16th of a mile could help her get back to that career top.

There are a number of angles one could tackle in the final race of the card, as many horses are exiting trouble trips last out. One such horse is #4 Win d’Oro, who was steadied early in the race, got a little uncomfortable while in tight and was forced to take up once again before finally getting wide and coming on strong late. A better trip gives him a solid chance at the winner’s circle. #3 Suggested ran a too-bad-to-be-true race last out when stuck very wide on both turns, but he does have races on his resume that make him competitive here, including a tough loss two-back going this distance. #8 Ahnaf was dreadful in his debut, and the connections now try stretching him out and switching to turf. It’s encouraging to see the Shadwell homebred does not drop in for a tag, as I have a feeling this one may be better than he’s shown. #1 Freedom’s Flight has had enough chances to win that I’ll be letting that one beat me at the short price.

Once again, if you are interested in seeing the exact plays our Horse Racing Experts have developed, click the link below to subscribe to the premium package! You will get premium plays and access to ask questions to all of our horse racing experts! Good luck to everyone this Sunday!