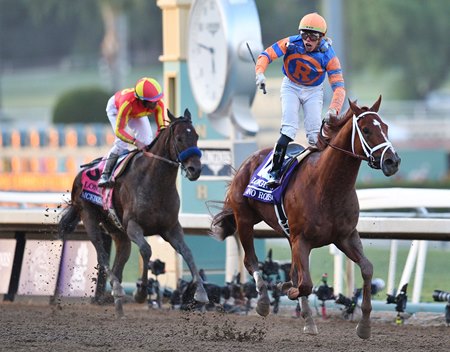 Following a big weekend of racing where we saw Authentic hold off New York Traffic in the Grade 1 Haskell and opening day at Saratoga, the latest buzz has shifted towards taking an early look at the top 10 contenders for the Breeder’s Cup Classic. I’ll post my top 10 contenders below, as of the week of July 20, 2020, with some brief thoughts towards each.

Authentic – He barely held on in the Haskell, and his pedigree suggests 10 furlongs is much too far for him.

Dr Post – He was a no-show in the Haskell, but that effort can be somewhat excused when up against a speed favoring track. However, the bottom of his pedigree is more sprint than stamina, and his Belmont Stakes runner up finish isn’t that impressive when you consider it’s 9 furlongs around 1 turn.

Uncle Chuck – Of all of the Baffert horses, this is the one who could be a monster. However, I’m not ready to put him on the list just yet, as he’s beaten a combined total of 7 horses in his 2 starts. I get the feeling he might be legit though, and distance shouldn’t be an issue.

Vekoma – He’s a fantastic miler, but I don’t think he wants to go 10 furlongs.

Midnight Bisou – I love Midnight Bisou, and if the connections declare her to be pointing towards the Classic than she gets added to this list probably in the top 3-5. However, I imagine she will end up in the Distaff instead for a rematch with Monomoy Girl.

Agree? Disagree? Feel free to send me your thoughts on Twitter @CalebWVU! Or, there's no better time than now to join the discord with Saratoga and Del Mar in full swing! Get the expert picks and selections daily! https://discord.com/invite/K4Z32Vv