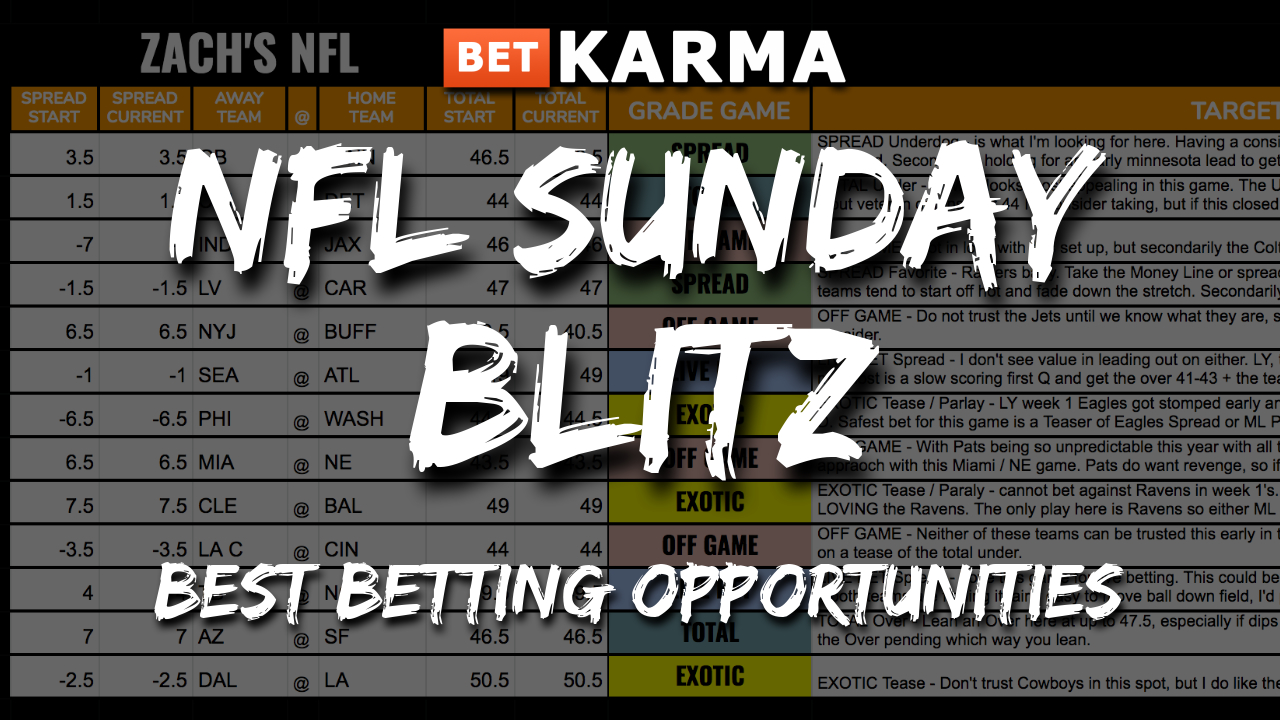 Zach’s weekly NFL Sunday Blitz Report is – The GAME within the GAME – or your weekly guide to help you decide what to target within each NFL Sunday game. Whether it is a spread, money line, total, teaser, parlay or live trading a game, this article and the BLITZ CHEAT SHEET is here to help you decide where to put your focus, energy and most importantly – MONEY! Don’t waste time trying to research and bet every total, spread and angle – instead, let’s look at the options that provide the most opportunity and value within a given game. Typically this article will be released Saturday/Sunday, but because week 1's lines are a moving wildly, let's give you a head start. This article is being posted as of September 6th, 2020.

The primary plays worth considering are the following:

The Cardinals played the 49ers well last year both times and only lost one game by double digits due to a meaningless fumble return for a TD. Take that away and Cards lose to the 49ers by a combined 7 points in 2 games. That’s not all. Cards upgraded on both sides of the ball and have a promising young coach against a team that is due for regression in every facet of their game. The 49ers caught the league off guard last year and with a banged-up receiver core to start the season, and a healthy Patrick Peterson, Cardinals defense should hold up in spurts. With Kyler Murray’s running ability and a new weapon in Deandre Hopkins, the Cardinals can get down 17 points and still find a way to cover this 7-point spread. AND, best of all, Cardinals are looking to be the fastest paced team in NFL history (2019 they were 3rd fastest in 1st half), which means more plays and, due to no pre-season, a gassed defense chasing Kyler Murray around in the second half.

Though I’m unlikely to play it, the over in the lowest total of the slate. Last year during week 1 these teams finished the game 17-16, and the Jets defense is worse this year, while the Bills offense is better with Diggs and Moss in the backfield. Just that in and of itself gives confidence these teams can add even 1 more TD to be right on the total of 39+.

The Exotic play worth considering is Colts. At 7.5, the line seems a tad high to bet in a division game while Colts break-in Phillip Rivers. I don’t doubt Colts win straight up, so teasing this line with some other options, whether in 2 legs, 3 legs or risking a 4 leg, I’d look to have Colts teased spread as a part of most of them.

The game most worth firing up the app and live betting is Seattle at Atlanta. These two teams went up and down the field against one another last year, and even Matt Schaub at QB tossed over 400 yards. I think both teams are better than last year, healthier and so this game should end competitively. If get the chance to get live action, I’d take Seattle at +4 or better and look to grab Atlanta at +7.5 or better. Obviously, any key injuries, like to Russel Wilson during the game, changes this handicap.

Bonus consideration: Look to play the total on the over live and look for a middle. This game should be about 27-21 at the bottom, so if the line dips to below 48 because of a slow 1st quarter, consider playing. From there, look to middle under 59.5. 30-27 looks like a plausible score in this one.

This WAS going to be my Off game of the week, but getting Patriots under a TD favorite at “Home,” is just too valuable to pass up. I don’t see Dolphins being a mere 3-point difference to the Patriots on a neutral field, and could see Patriots winning easily by double digits. Regardless, I have Pats as my 12th ranked team and Dolphins as 28th, and with all the off-season chatter around Patriots’ dynasty being over (because they lost Brady, Hightower and a few others), I think the market is overly and unfairly bearish on this Pats team. Remember, Cam Newton is better than Brissett, Jimmy G. and Matt Cassel, all of whom flourished under Bill’s reign. If this was 43-year old Brady at QB, this line is at least through the 7 and likely headed to 9.5.

GAME OF THE WEEK

Opportunities abound in this game. Panthers are replacing 6 starters on defense, have a whole new coaching staff, but upgrade at QB and now have an offense with a Sean Payton disciple calling the plays – the passing coordinator of LSU’s Burrow squad last year.

Raiders defense should be improved this season, but without a pre-season, upgrades on both offenses, Raiders with same offensive line as last year, both these teams should put up points. AND because Panthers defense looks to be the worst in the NFL this year, Raiders should cover in a volatile high-scoring week 1 game.

Excuse the qualifiers, I work with probable terms, not absolutes. That said, I’d be comfortable leading out on Raiders spread, the total over, teasing both, parlaying both and live betting the other way. E.g. spreading out a max play over all the above. This game could finish in the 3-4 TD’s for each team range, which puts my final score at about 31-24. So, if decide to bet live as well, and Panthers look to be able to move the ball by the 2nd quarter, look to get them at +10.5 for a middle and consider a Total hedge Under 55-59, though in this one, I’d let it ride. For any Player Props, will have to check in on the Bet Karma Discord slack Sunday morning.

Quick note on the Cheat Sheet, even if a game or side is marked with a clear SPREAD, TOTAL or EXOTIC etc., it does not mean there aren’t other viable options. Sometimes I will note that there are in fact more than one option worth considering. And remember – the Sportfolio trio:  Corey, Brett and I publish our locked in plays every week in the Premium Football channel on Bet Karma’s Discord.

If haven’t checked out the other 2/3’s of our Sportfolio trio, look out for Corey’s weekly handicapping article and Brett’s Sportfolio article, as well as catch our weekly NFL preview podcast The Sports Trading Desk on itunes, Stitcher or YouTube. Our collective Sportfolio picks are only posted in Discord NFL Premium. Sign up at BetKarma.com , follow, and get in the game!

*Note: The Blitz Report is posted within 24 hours of Sunday game-time except Week 1, so final allocations of the Sportfolios and Zach’s final recommendations can only be found in BetKarma.com Premium Discord Sunday mornings by 12pm EST.