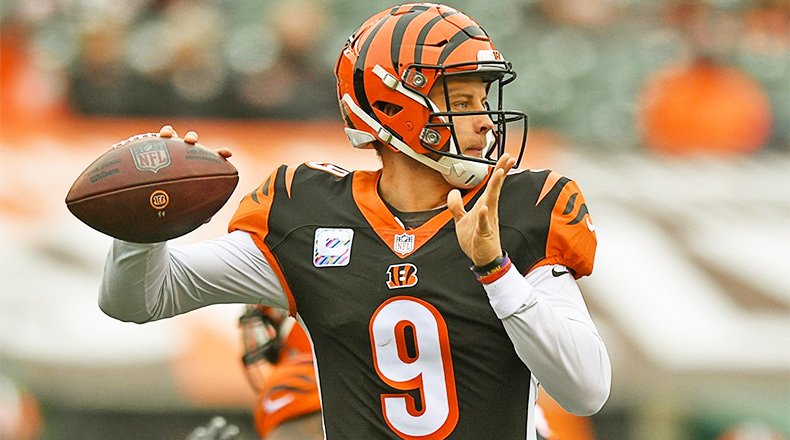 Get access to our proprietary NFL Prop Predictor by signing up for NFL Premium or MVP by going to BetKarma.com/Premium. Each week I will focus on one of the matchups featured in the Prop Predictor and give my 2 cents on what the betting model is telling us. For Week 8, I will focus on the Titans/Bengals game. Obviously, we know that Henry runs the ball a lot. What most people do not realize is Henry averages 2.8 targets a game with 13.5 receiving yards/game. Tennessee is 2nd in the league for target % between 0-9 yards and the Bengals are 4th in allowing that target depth range. Bengals are only allowing 4 receiving yards/ game for opposing RB’s which is why I think Vegas has this prop lower than our prediction model of 12.5. Lastly, Henry is top 3 for RB’s broken tackles. He may not see a ton of targets, but it just takes one and then you must make sure you actually tackle him, Norman learned the hard way!! Burrow holds a 11.3% rushing MS with 6.7 rushing yards/game… this is just designed runs. When you add in the scramble yards Burrow averages 2 scrambles with 10.6 yards/game. So far Tennessee is allowing 13.5 rushing yards against quarterbacks. The Titans do not put pressure on the QB ranking 30th in QB sack %. I see a slight increase in Burrow’s rushing attempts in the past 3 weeks (1, 2, 5). Burrow QB rating has also steadily increased in the past 3 weeks (66.4, 78.3, 112.5). This tells me Burrow is increasing his QB IQ and when to tuck and run as opposed to forcing the throw.

There have been weather reports of 15-20 mph winds and gusts of up to 30 mph. Burrow leads the league in AY. The Bengals are 8th in net yards/ pass attempt. Karma projection has Burrows passing yards at 257, 32 yards less than the prop. Cincinnati is 6th in target % between 10-19 yards. Cincinnati averages 4.7 deep attempts/ game, but the Titans don’t give up the explosive pass ranking 27th for target depth 20+ yards at just over 7%. I expect Joe to take some chances, but I do not see him being successful limiting his passing yards in a windy matchup. Drew’s snap % has been steadily increasing as the season goes along. He averages 76%, but last week was there for 97% of snaps! Burrow has also targeted him at least once every game and is now averaging 3.6 targets/game with 24.9 receiving yards/game. The Titans let up 59 receiving yards/game to tight ends. Zone coverage has been the only coverage Cincinnati utilizes Sample and he holds a 96.3 passer rating in zone coverage while Tennessee runs zone coverage 56% of the time. Karma projects Sample to have 26.98 tomorrow and if his snap % stays there I’d be confident to project even more. Giovani “Mustache” Bernard is averaging 3 receptions/game with 24.9 receiving yards. The Titans do not allow much to happen for pass catch running backs allowing 28.5 receiving yards/game. Burrow favors his WR 68% of the time which is 3rd in the league and with the Titans CB injury situation this is too good of a matchup to stop now. The line is set at Gio’s ceiling and while he could get a screen and bust one to the house Karma’s prop model projects 20.27 receiving yards making this the best bet for the game.