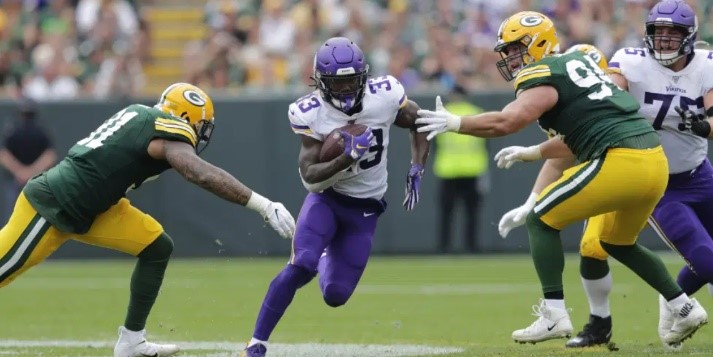 Get access to our proprietary NFL Prop Predictor by signing up for NFL Premium or MVP by going to BetKarma.com/Premium. Each week I will focus on one of the matchups featured in the Prop Predictor and give my 2 cents on what the betting model is telling us. For Week 8, I will also be focusing on the Vikings/Packers game. 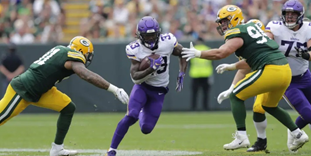 When Cook is fully healthy, he is a game changer for his team! For the receiving side of things, he sees 11.7% target marketshare (MS) which matches up perfectly for a Green Bay team that has allowed 63 receiving yards to opposing running backs. Vegas currently has Green Bay favored by 6.5 which tells a story of the Vikings having to play catch up. The Vikings play at the second fastest pace when trailing 7+ points and throw 6th most when trailing 7+ points which should create more opportunities for Cook. Jaire Alexander is going to be covering either Jefferson or Thielen so Cousins will have to get Cook involved in the passing game.

Now it is time to talk about Cook’s rushing production. Minnesota is 2nd in offensive-line adjusted line yards (4.91) and 1st in yards per carry (5.08). Green Bay defensive-line is 22nd in adjusted line yards and 29th in stuff ranking. Green Bay is the number 1 team to allow a successful zone run and Minnesota happens to run successful zone runs 52% of the time (6th best in league). Karma’s model is projecting 81 rushing yards and with Cook averaging just under 20 attempts/game I see this prop easily cashing in.

The Packers lead the league in drive success rate (DSR). They rank 7th in touchdowns/redzone (TDs/RZ) and 16th in field goals/redzone. When Green Bay scores they score touchdowns not field goals, but wait it gets even better. The Packers are 4th in the league for percentage of team touchdowns that were gained from passing (73.91%). Minnesota defense is 22nd in TDs/Drive and 4th in touchdown % gained from passing. Green Bay’s team total is pointing just north of 28 points and Karma projections show Rodgers at 1.99 passing touchdowns indicating the edge on the over.