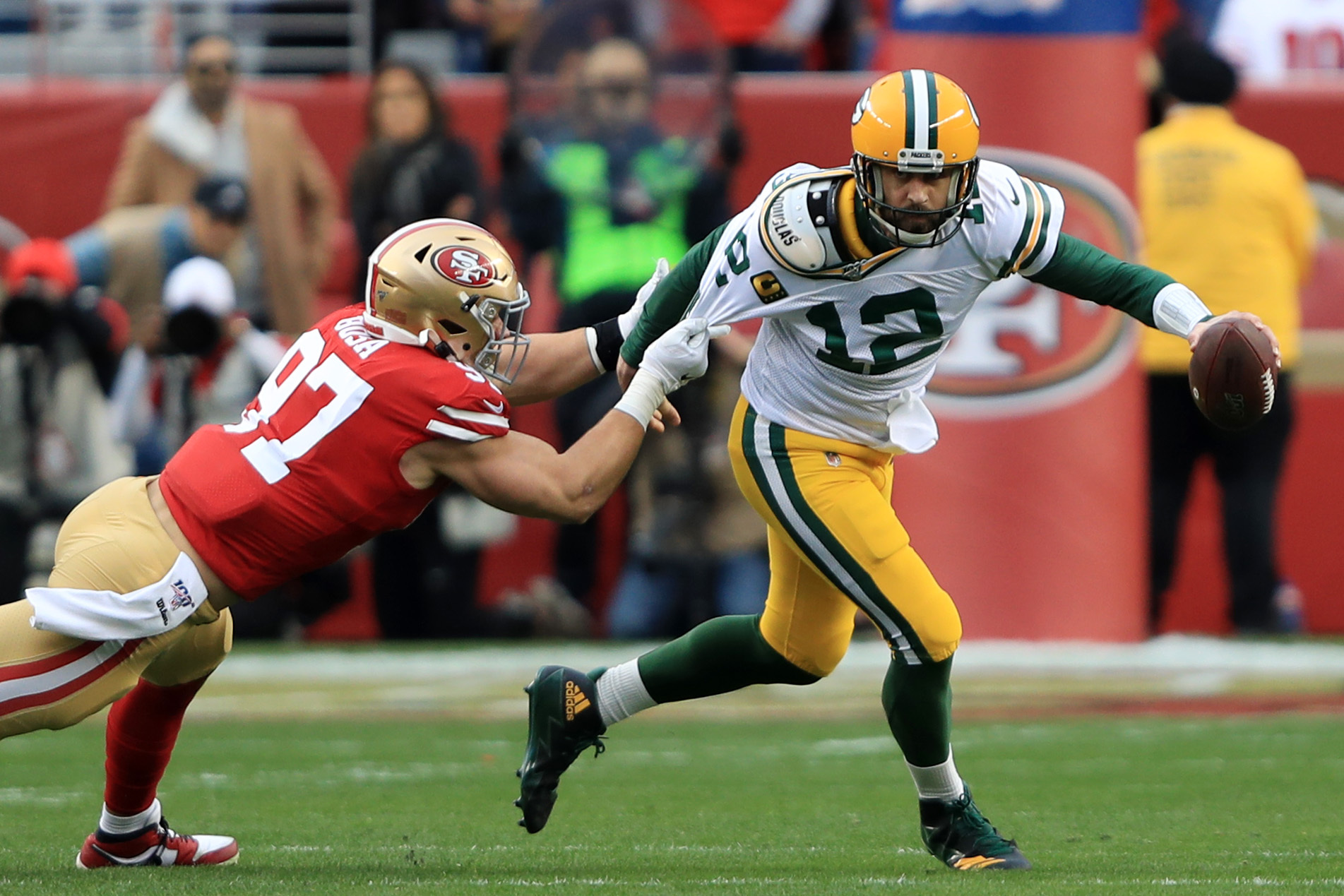 Thursday night brings us a matchup of two top ten offenses. These teams do it well, however, in two very different ways. The Green Bay Packers have the second-best passing attack in the NFL, only behind the Seattle Seahawks. Aaron Rodgers is looking every bit like one of the best three quarterbacks in the league. It appears he has turned back the hands of time to his Super Bowl run in the 2010-2011 season. He has turned a top five receiver into the best receiver in the NFL. Rodgers is making Devante Adams’s job very easy. This passing attack will square off against the second-best coverage unit. The San Francisco 49ers are middle of the pack in pass rush, so Rodgers should have a good amount of time behind his top five passing blocking unit. The 49ers do it by pounding their opponents into submission. They have a top five run blocking unit with the number one rushing attack in the NFL. Despite the Packers having a decent rush defense, they have clearly shown the ability to get trounced in certain spots.

The problem with this game on both sides are the injuries. The Packers have multiple running backs that will miss this game. A.J. Dillon is out after testing positive for COVID 19. Jamaal Williams, after having close contact with Dillon is also out. Aaron Jones has been nursing an injury. The Packers are one of the most conservative teams when it comes to injuries, so the outlook does not look promising for the prospect of Jones playing. This would leave Tyler Ervin as the lead back, with Dexter Williams sharing the load. This would be a significant drop off. Nonetheless, they still have Rodgers and still have Adams. If you think the Packers’ injuries are bad, you haven’t seen anything. The 49ers have lost their best players at all four offensive skill positions. It will be nearly impossible for this team to compete in the best division in football. Losing Jimmy Garoppolo and George Kittle for several weeks going forward appears to be the final nail in the 49ers’s season.

Despite the Packers being on the road, this is still  Rodgers and Adams versus Nick Mullins and others. The Packers were destroyed twice last season by San Francisco. One of those defeats kept Green Bay out of the playoffs. Especially after getting dominated by Cook and the Vikings, I imagine the Packers are not happy.  Good luck 49ers.

Betting tip of the week: Home Field advantage used to legitimately equate to 3 points. Nowadays that home field advantage is antiquated and does not line up. Home teams are overvalued this year. That’s it. That’s the tip.