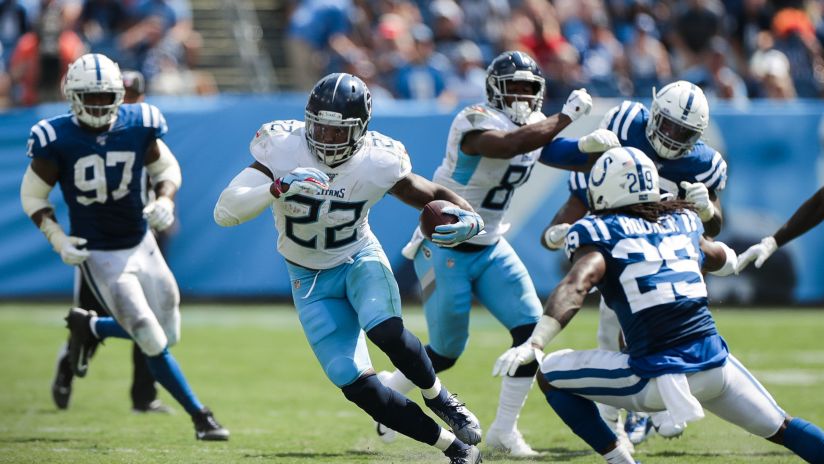 The division leaders in the AFC South will square off in a Thursday night matchup that should be good. I anticipate a hard-hitting battle between two very solid teams. The Tennessee Titans are a top five offense so far this year. Their best weapon to defeat their opponents is their rushing attack. Derrick Henry has been amazing this season. He is second in the league in rushing yards, only behind Dalvin Cook. He only trails Cook and Todd Gurley in rushing touchdowns, with eight. He has truly been a work horse for the Titans. He's averaged 22 carries a game. This shows that the Titans want to feed him often. Ryan Tanehill has been very good also, so we cannot overlook him. He is fifth in the league in passing touchdowns and has only thrown three interceptions. The only quarterbacks that have started each of their games and have thrown less interceptions are Patrick Mahomes and Aaron Rodgers. That is very good company to be in. Tanehill does not have the flashy passing yardage numbers as the elite quarterbacks, but he has elite efficiency. Although they give up 25 points per game, the Titans are top ten in defensive efficiency.

The Indianapolis Colts do things much differently. They cover receivers well, tackle well and stop the run. They are the sixth best rushing defense in the league and the fifth best tackling team. The matchup between this Titans rushing attack and the Colts rushing defense will be key to who has the advantage in this game. The Colts have a middle of the road passing attack. This passing attack is protected by a top ten pass blocking offensive line. This offensive line has the advantage of an average Titans pass rush. Phillip Rivers has been an extremely difficult quarterback to predict. He throws it to a ton of different players and has shown the ability to look like an elite quarterback. He is also shown the ability to look completely washed up. Johnathon Taylor is a great talent. Unfortunately, the Colts refuse to give him a workhorse role in the offense. Some running backs that have missed games due to injury have more carries than Taylor and I cannot understand why. He only averages 13 carries per game. That is not enough carries to maximize Taylor's talent.  I anticipate the side of Rivers that we get Thursday will be another key factor in who wins this tough divisional matchup.

Both teams are 3-2 in their last five games. Neither team has lost to their NFC opponents. Although this game puts these teams at the same record, the Colts need this game way more than the Titans do. If they Titans win, they will move to 3-0 in the division and the Colts will be 0-2. This will make it more difficult for the Colts to overtake the Titans in a division race late in the year. I am looking forward to a highly contested, hard-hitting battle that will leave one team with a huge boost of momentum headed into the second half of the NFL season.

Betting tip of the week: Do not buy points. It is hard enough to win if you must lay the standard 11/10. Do not make it worse for yourself by paying extra juice to get the game on a particular number. If you missed a bet and no longer like the current number, you must pass on the bet. Either get your bets in early or take the number that's there. Do not spend money on buying points!