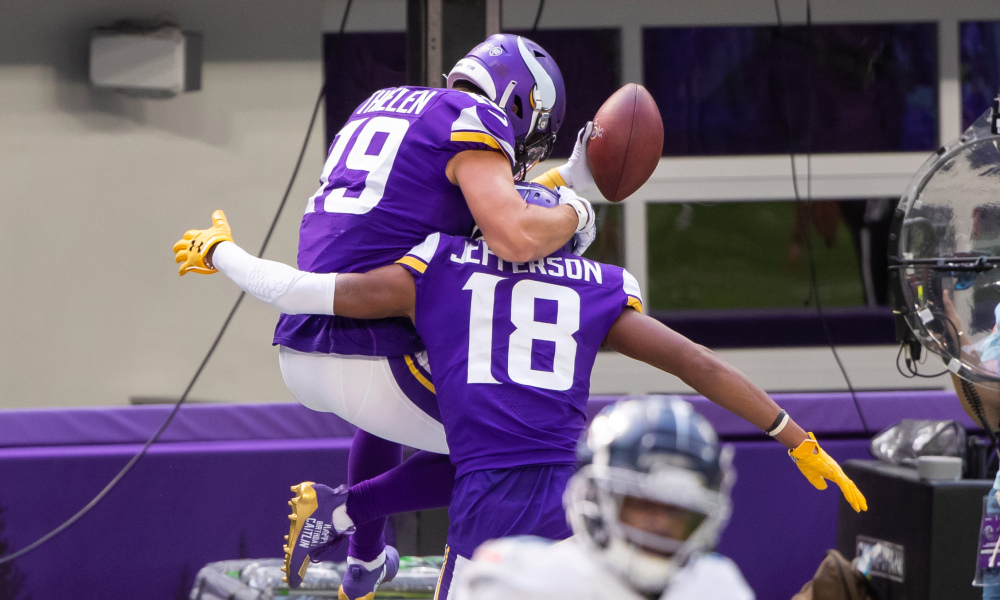 Get access to our proprietary NFL Prop Predictor by signing up for NFL Premium or MVP by going to BetKarma.com/Premium. Each week I will focus on one of the matchups featured in the Prop Predictor and give my two cents on what the betting model is telling us. For Week 11, I will be focusing on the Cowboys/Vikings game.

Elliott averages 5.6 targets with 4 receptions and 26.4 receiving yards per game. The Vikings are currently allowing opposing running backs 39.77 receiving yards/game. The last three weeks have not been Zeke’s best, averaging 1.3 receptions/game, but I believe we can attribute that to the quarterback changes (week 9- Gilbert, week 8- DiNucci, week 7- Dalton). With Dalton under center in week 6 & 7 Elliott saw an average of 6 targets. Zeke has surpassed 14.5 receiving yards 6 times out of his 9 games this season.

Karma projects 20.09 yards which is a 37% increase from the implied total, making this the best prop of the game. I anticipate the Vikings to get up early forcing Dallas towards the passing game creating more opportunities for Zeke.

Thielen averages 7.3 targets with 4.6 receptions and 58.1 receiving yards/game. Thielen draws one of the best matchups this week against a struggling cornerback, Anthony Brown. Brown is allowing a cornerback quarterback rating of 100.45. The Cowboy’s defense is second in the league for targets of 0- 9 yards downfield at 58.5%. Thielen’s target depth is 0-9 yards 47.6% of the time. Thielen leads his team in receiving MS at 28.8%.

Karma projects 5.18 making it the second highest difference for this game at 32%. As good as Dalvin Cook has been, I expect the Cowboys to first focus on him which will allow Thielen to get his receptions.

We must go back to quarterback play with this prop. When Dalton played week 6 and 7 Cooper averaged 7 receptions. Week 6 Dalton targeted him 10 times and Week 7 targeted him 7. With Zeke not playing, Dalton is making Cooper his number one target. Cooper also leads the team is receiving MS at 22.1%. Cooper will have time lining up against cornerback Chris Jones. Unfortunately, for Jones he is allowing a cornerback quarterback rating of 138.54.

Karma projects 5.11, and given my take on the game I believe that is extremely low. The Cowboys average lead is almost dead last in the league at -7.29. When the Cowboys are down 7 or more points, they throw the ball 71.04% of the time. I am expecting Dallas to force feed Cooper easily surpassing this total.

Karma projects 34.77, which is a hair over the total. Teams having been finding success against Minnesota through the air and tight ends. With the increase in targets Schultz has been receiving I expect him to exceed this total.