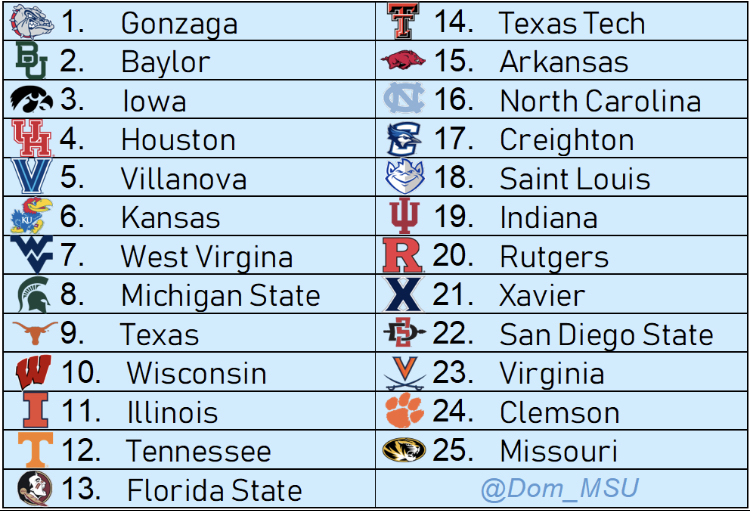 As I said last week, it's Gonzaga, then Baylor, then everybody else. So I'm starting to think the #3 spot is going to be a revolving door.  Last week, Houston looked solid enough to be the "best of the rest". Then Iowa stepped up to the plate and hit it out of the park.

Iowa spent the past week racking up wins against North Carolina, Iowa State, and Northern Illinois. Iowa showcased their offensive firepower as they exploded to an early 15 point lead agianst UNC behind a barrage of three-pointers that seemingly could not miss.  The lead was not insurmountable though, as UNC stole the lead back with around 10 minutes to go in the second half. The Tarheels exploited Iowa's weaknesses on defense. Iowa defense is not only suspect, it is perennially underwhelming under coach Fran McCaffrey. With one of the worst transition defenses in all of Power 6 basketball, Iowa allowed UNC to score 24 points in transition, and 42 points in the paint. I believe UNC unveiled a not-so-secret blueprint for beating Iowa - get out and score in transition, attack the paint and offensive glass. The Tarheels also had the big bodies down low to throw at Luka Garza to slow him down. Since the Big Ten is the league of the bigs, conference foes may be able to do the same. However, Iowa showed tenacity to fight back and get the victory. When Iowa makes 17 three-pointers on highly efficient shooting, it will be tough to beat them no matter how poor their defense plays.

Next up for Iowa was Iowa State. The Cyclones aren't going to be good this year - they're not a tournament team, and it's extremely likely they finish bottom three in the Big 12. However, in a prime let down spot after a big win, and against an in-state rival, Iowa simply handled their business and pulled away against a lowly Iowa State team. The Hawkeyes didn't take their foot off the gas on Sunday, as they literally doubled up the points of NIU, winning 106-53. Iowa has proven to outscore opponents through electric perimeter shooting or down low with NPOY favorite Luka Garza, and both those styles compliment each other and open up opportunities for each other.  Here's to hoping Saturday's heavyweight matchup between Gonzaga and Iowa goes off without a hitch, so we can enjoy watching the two best offenses in college basketball.