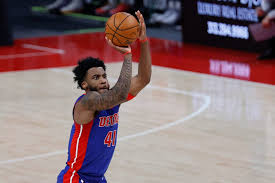 The Charlotte Hornets opened as 5.5 point home favorites against the Detroit Pistons tonight. The line shifted slightly toward Detroit throughout the day with Charlotte sitting as 4.5 point favorites. The game totals increased from 221.5 points to 225.5. The Pistons team total shifted from 108 to 110.5, while the Hornets increased from 113.5 to 115.

Charlotte’s been one of the best against the spread (ATS) teams in the NBA this season, covering in 55.9% of their games. Detroit has found slightly less success, covering in 51.4% of their contests. The Hornets have found similar success at home, although the Pistons have covered in only 47.4% of their road games this season.

Detroit’s split the over/under throughout the season, finding each in 50% of their games. Charlotte’s been more lopsided, hitting the over in 58.8% of their contests. Surprisingly, the Hornets have hit the over in only 37.5% of their home games. The Pistons have found the over more often than not on the roading, hitting it in 60% of their games outside of Detroit.

This game features one elite prop bet according to our Prop Predictor. Saddiq Bey’s rebounding total is set at 4.5 rebounds. He boasts a 5.7 Karma Projection, though, giving this bet an A+ Karma Grade.

With Detroit rebuilding, Bey will continue to find 30+ minutes on a nightly basis. Although the results have been there recently, he possesses plenty of rebounding potential and gets a plus matchup. The over is one of our Prop Predictors favorite bets on the slate.