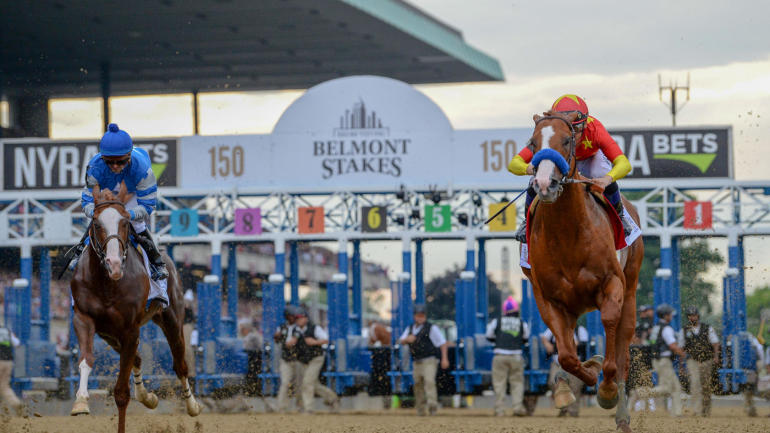 Making Bank in the Belmont Stakes

It has been a crazy year in horse racing so far with some surprising outcomes in the Kentucky Derby and the Preakness, and we are now facing the third and final jewel of the Triple Crown in the Grade 1 Belmont Stakes. The Belmont Stakes, dubbed "the test of the champion", is contested over a grueling mile and a half distance at Belmont Park and will be the ultimate test of stamina. Both the Derby and the Preakness have been won by long shots; Medina Spirit crossed the wire first in the Derby at generous odds of 12/1, and Rombauer pulled off an upset of his own, storming past Medina Spirit and Midnight Bourbon at 13/1 to win the Preakness by a convincing 3.5 lengths. Can we expect another upset in the Belmont?

I do think we will beat another favorite in this race, but don't expect to see a double-digits winner again.

Essential Quality is the 2/1 morning line favorite who is seeking to avenge his loss as the beaten chalk in the Derby. He is the picture of consistency, and he always runs his race and tries hard. He is more of a grinder who lacks an explosive turn of foot, but he has loads of ability and enough tactical speed to keep himself out of trouble. He had a bit of a rough trip in the Derby when bumped at the start and then forced to race extremely wide around both turns. He is unquestionably the most likely horse to run his race and hit the board, but he may not be the most likely horse to win.

Many bettors may be discouraged by what appears to be a non-effort by Rock Your World last out in the Kentucky Derby, but I would strongly advise to toss that race out completely. Rock Your World was making only his second career start on dirt and facing a huge field on America's biggest stage after shipping out of California for the first time. More important than that, however, was that he got completely mauled at the start of the race when he broke slowly, took a very hard bump, and was pinched back between horses towards the rear of the field. This is a horse who needs to be on or near the lead to be most effective, and you could tell he never got comfortable after that terrible start. Rosario did what he could to keep him wide to avoid the kickback, but ultimately the bad start was too much to overcome.

If you look at Rock Your World's win in the Santa Anita Derby where he had a clean break, he set a blistering pace and was a dominant winner over none other than Medina Spirit, who went on to win the Derby. Dream Shake also came out of that race to run second in the Grade 1 Pay Day Mile, beaten a head to Jackie's Warrior. Rock Your World owns the fastest TimeformUS speed figure of the field in his Santa Anita Derby win, even faster than the winners of the Kentucky Derby and the Preakness. Furthermore, he also projects to be lone speed in this race, as nobody in this field is likely to be able to compete with him for the lead. I still believe this horse has loads of talent, and he gets a significantly more favorable setup today with the smaller field size and lack of early pace pressure. At his morning line of 9/2, he will undoubtedly be my play of the day.

Catch the Belmont Stakes this Saturday, June 5, as Race 11 with a post time of 6:49 ET. For more picks, plays, group tickets, and analysis, be sure to subscribe to the Horses Premium package or MVP package on BetKarma discord here!