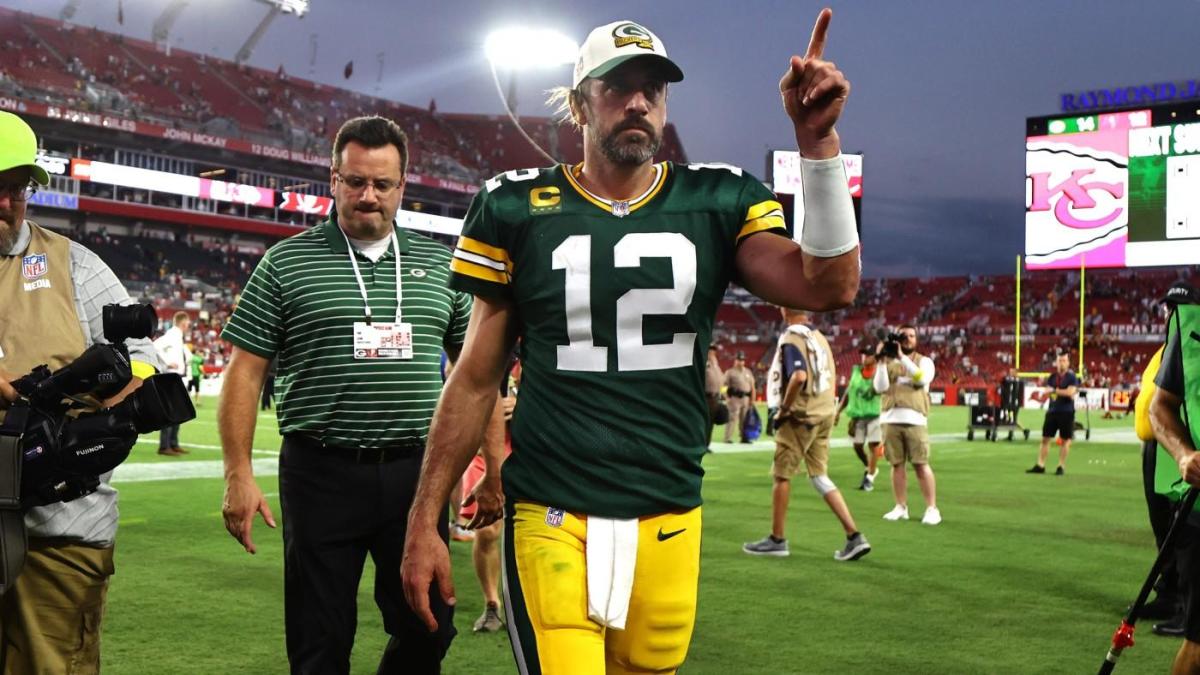 The Green Bay Packers’ offseason was filled with months of confusion, anger, and uncertainty. At least that’s what was reported by the media. Adam Schefter initially reported that Aaron Rodgers was “so disgruntled with the Green Bay Packers that he has told some within the organization that he does not want to return to the team.”

Ultimately, after skipping quite a bit of the offseason, Rodgers returned to the team under specific conditions. He wanted more input on the decision-making process, which led to Green Bay acquiring Randall Cobb to appease the reigning MVP. Rodgers said that he has a professional relationship with GM Brian Gutekunst. He also stated he’s focused solely on this season and figuring everything out after that.

Regardless of what the future holds, we know that arguably the best quarterback in NFL history will be under center for Green Bay. He’ll be another year in the Matt LaFleur offense with a familiar group of starters around him.

This article will look at whether we should take the over or under on Green Bay’s 2021 win total with the odds coming from the DraftKings Sportsbook.

Rodgers has started at least 15 games in 11 seasons since 2008. He played only 9 and 7 games in 2013 and 2017, respectively, posting winning records in both seasons. Overall, Rodgers has won double-digit games in 9 of those 11 seasons.

He posted a 6-10 record as a first-year starter in 2008. He also recorded a 6-9-1 record in a rough season in 2018 with Mike McCarthy and Joe Philbin splitting head coaching duties.

Green Bay’s averaging 10.6 wins per year when Rodgers plays [roughly] a full season. If you exclude his “rookie” season in 2008, that total jumps to 11.

Most importantly, the Packers have found tremendous success in recent years. Since LaFleur took over as head coach, they’ve won 13 games in consecutive seasons.

The Green Bay offense will feature a similar group of players as last season. Jamaal Williams left via free agency, vacating an important role in the offense. With that being said, Aaron Jones signed a $48 million contract in March, returning as the most important running back of the group. Second-rounder AJ Dillon is set to take on a bigger role after a flashing tremendous upside as a rookie. Green Bay also added Kylin Hill in the NFL Draft.

The remaining skill positions stayed the same for the Packers. They added Randall Cobb via trade and Amari Rodgers in the draft to their wide receiver group. After dealing with injuries as a rookie, Josiah Deguara could take on a slightly larger role in the offense this year, as well.

Green Bay will be doing some shifting around their offensive line this season. David Bakhtiari will return from injury at some point, although he’ll miss the beginning of the season. Elgton Jenkins, Lucas Patrick, and Billy Turner will return as starters from last season. Second-round rookie Josh Myers will have big shoes to fill, taking over for the departing Corey Linsley. Early in camp, Rodgers has been impressed with Myers, though, suggesting their line won’t take much of a hit this season.

The Packers’ defense saw very few changes throughout the offseason. Dean Lowry and Kenny Clark will start along with Kingsley Keke on the defensive line. Preston Smith and Za’Darius Smith will provide their pressure as Green Bay’s outside linebackers and edge rushers.

The secondary remains intact with some additions. Jaire Alexander will continue to be a top cornerback in the NFL. Adrian Amos and Darnell Savage make up a top safety pair, as well. Green Bay brought back Kevin King, who struggled for the Packers last season. They also drafted Eric Stokes in the first round, adding upside to the group.

The big changes for the Packers come at their inside linebacker position. Krys Barnes will return as a starter, while Christian Kirksey left in free agency. The Packers replaced him with De’Vondre Campbell, upgrading the position. Essentially, they’re bringing back the same defense with small potential upgrades.

I don’t take the word lock lightly, especially when projecting win totals. There are some games where Green Bay will clearly be favored, although I’m not will to call them a lock. I’m strictly reserving the lock for games that I believe are virtual guarantees for them to win.

Green Bay gets relatively easy matchups in their division this season. The Detroit Lions are projecting to be one of the worst teams in the NFL, giving the Packers two easy wins this season. Green Bay is currently favored in all four games against the Minnesota Vikings and Chicago Bears, as well. With that being said, road games against any divisional opponent are difficult, leading me to only lock in a pair of wins in these four games. Keep in mind, that doesn’t mean I believe Green Bay will lose the other two, but I’m willing to nearly guarantee they win at least half of them.

The Packers have three other games that should borderline be put into this category. The first comes against the Pittsburgh Steelers, who are on a clear downswing as a franchise. Green Bay’s a -6 point home favorite against them, giving them nearly a touchdown advantage in this game. The week after that, they travel to Cincinnati for a matchup with the Bengals. Although on the road, Cincinnati isn’t a team ready to make a put for the playoffs, and Green Bay is once again a -6 point favorite. The final game is a home matchup against the Washington Football Team, who could make a playoff push. With that being said, they don’t feature a team that will be able to travel into Green Bay and steal a win, as the Packers are -6.5 point favorites in this game.

We outlined 7 locks in the section above, leaving us with 3 wins to hit the 10 win total and 4 wins to surpass it. We can start here with the final two division games, as I only gave two games as locks. On the road, Green bay is a -4.5 point favorite against Chicago and only a -1.5 point favorite against Minnesota. Although favored in both games, it’s reasonable to believe Green Bay could split them, winning one and losing the other.

The Packers are a surprisingly large favorite at home against the Seattle Seahawks and Cleveland Browns. They are -5 and -4 point favorites in those games, respectively. Arguably the biggest key to these games is that they’ll be played on November 14th and December 25th, giving the Packers a massive edge in Wisconsin. These are two very winnable games, although far from locks against high-end competition.

Green Bay’s a -3 point favorite or shorter in 3 more games this season. They’re currently -2.5 point favorites in a road matchup to start the season against the New Orleans Saints. I tend to agree with this line as New Orleans is already dealing with injuries. They’re also -3 point favorites against the Arizona Cardinals (road) and Los Angeles Rams (home). The Cardinals still feature a young team that’s seemingly ready to make a playoff push. With that being said, Green Bay boasts a team that is a true Super Bowl contender and should have an edge, even on the road. Once again the Packers will enjoy a hot-weather team traveling to Green Bay in the Winter, as they play the Rams on November 28th. This is a similar situation to the Seahawks, where the Packers should be small favorites.

Green Bay is an underdog in 3 of their 17 games this season, though. The most surprising is a matchup in San Francisco against the 49ers. They’re +2.5 point underdogs, suggesting they’re live for a win. The other advantage could be that this game is early in the season, and I’d prefer to play against Jimmy Garoppolo (assuming he does indeed draw the start) rather than a dynamic Trey Lance.

The Packers are also -3.5 and -3 point road underdogs against the Kansas City Chiefs and Baltimore Ravens this season. Although they do have the potential to win these games, they should be underdogs, projected for losses.

Green Bay’s one of the best teams in the NFL, as they’re favored in 14 of their 17 games prior to the season. Their win total of only 10 wins feels far too low for the talent on their roster and coaching staff. Keep in mind, this is now a 17 game season, giving the Packers an extra game to find the over. The key to paying -140 odds on this is that it’s set at 10 wins, guaranteeing a push if they hit double-digits.