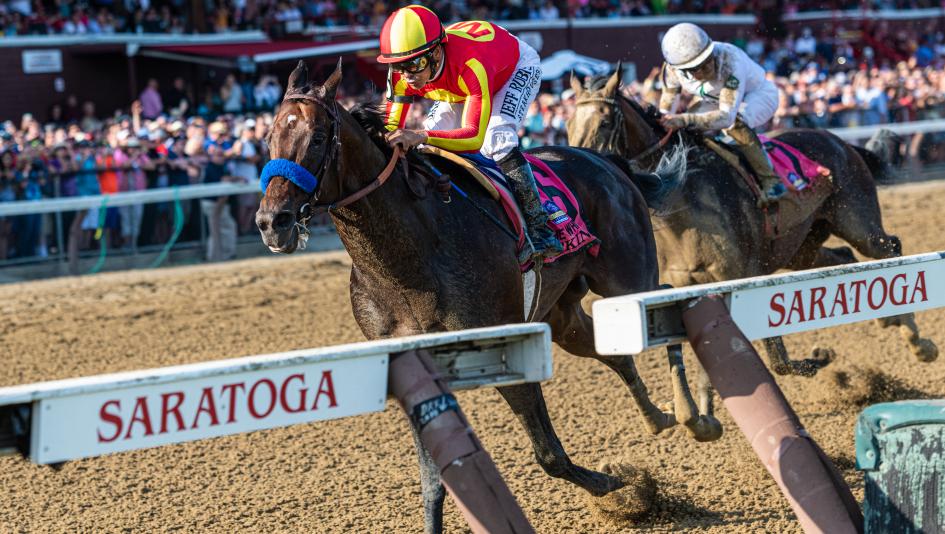 This weekend brings us an absolutely LOADED card at Saratoga, with four graded stakes races headlined by the Grade 1 Whitney Stakes. The Whitney is one of the premier races of the entire year for older male horses going nine furlongs on the dirt, and it has proven to be a key prep for the Breeder's Cup Classic in November. While the field for the Whitney may be short on size, it's certainly deep in quality. You can reasonably make an argument for each of the five runners to win the race, so let's take a deeper look at some of the main contenders.

#1 By My Standards - By My Standards is a multipe Grade 2 winner and extremely talented horse. He appeared to tail off form late last year, but he's kicked off his five-year-old campaign with a flourish, winning the Oaklawn Park Mile and then running a better than it looks second last out in the Grade 1 Met Mile. I honestly think he was the best horse in the Met Mile, but he was compromised by a very rough start where he was pinched back early and hung out wide going into the turn. The winner that day, Silver State, got a dream trip up the rail, and I think the trip made all the difference in the results. A one-turn mile at Belmont is probably a little too sharp for By My Standards, so the stretch out back to two turns going nine furlongs should be ideal.

#2 Silver State - It's hard to knock Silver State, as he enters this race riding a six race win streak, highlighted by a big win in the Grade 1 Met Mile last out. Asmussen has really gotten this colt in career form as a four-year-old this year, and he should be a big player in this race. However, my main concern with him is that he feels like he has gotten ideal trips in his last few starts while taking advantage of some bad luck trips by a few of his main rivals. I wouldn't talk anyone off using him, but at his morning line odds of 4/1, I'd rather go for By My Standards at 10/1.

#3 Swiss Skydiver - I'll be the first to admit I'm a huge Swiss Skydiver fan. She danced every dance last year, took on the toughest competition, and she actually beat the boys in the G1 Preakness. Unfortunately, this does not seem like the race to bet the hard-knocking filly. She was actually targeting the G3 Shuvee stakes at Saratoga on July 25 for fillies and mares, but due to an outbreak of equine herpesvirus in her barn, she was forced to quarantine and miss that race. I'm never a fan of horses entering big races as a backup plan, and the waters here feel much too deep for a horse who wasn't in her best form coming into this race anyway.

#4 Knicks Go - This race really starts and ends with how you feel about the favorite, Knicks Go. If the "good" Knicks Go shows up, the rest of the field is fighting for second place. Simply put, nobody in this field is capable of finishing within three lengths of Knicks Go if he is on his A-game. However, Knicks Go disappointed twice in a row, both in Saudi Arabia and again in the Met Mile. He rebounded impressively last out when crushing the G3 Cornhusker, but he was really supposed to crush that field. So which version of Knicks Go shows up this time? Brad Cox is on the record stating that he believes Knicks Go's speed carries much better around two turns rather than one turn, and if you look back at his two losses in the Met Mile and Saudi Cup, both of those races are conducted around a one-turn configuration. Strike those from his running lines, and his entire story changes. I think the one-turn races combined with the arduous ship overseas and back probably just took the starch out of him a bit. However, he seems to be back on track and is undeniably the horse to beat.

#5 Maxfield- Maxfield is a horse I've personally never been a big fan of, but he seems to have enough of a rabid fan club that I'm sure my support is not missed. If you only look at his record, it's hard to fault him as he's won seven of his eight career tries. However, I'm strongly of the opinion that he's been taking advantage of incredibly weak fields. The one time he stepped up to face Grade 1 company, he was a well beaten third as the heavy favorite. That field was much weaker than the field he faces today, and I'm just not convinced he's nearly as good as billed. He certainly could win this race, but as the unanimous second choice in the wagering, I'm taking a stand against.

The "good" Knicks Go should win this race if he shows up, and I think that he will. I'm not trying to beat the heavy favorite. I'm playing against Swiss Skydiver and Maxfield, both of whom are likely to attract significant money. By My Standards is my key long-shot, and while I'm not very confident anyone beats Knicks Go outright, I really think By My Standards has a great chance to run second for a respectable exacta. Silver State makes a lot of sense, but I'd need a better price to consider using him underneath.

Knicks Go / By My Standards exacta