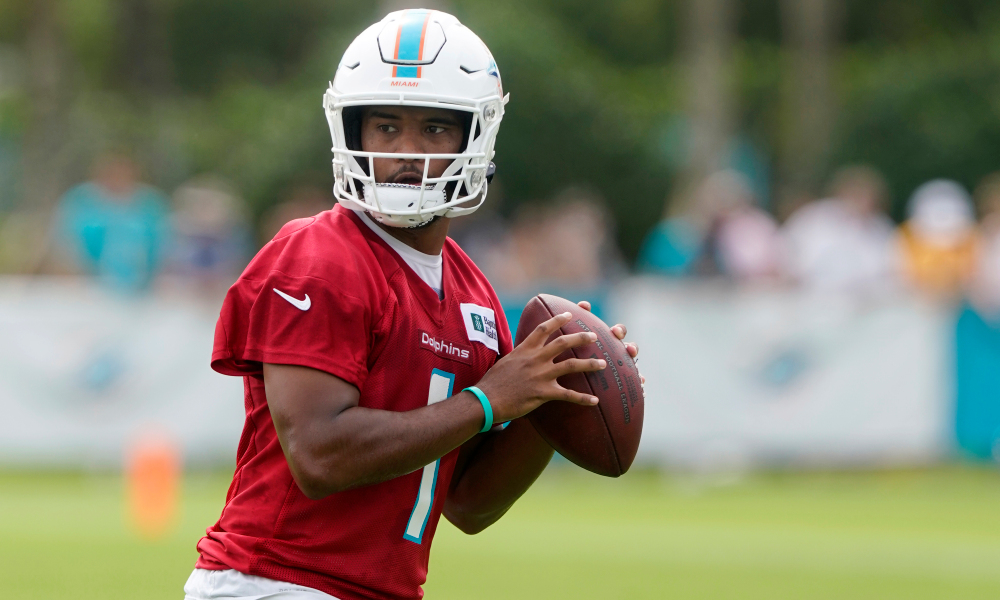 Will the Miami Dolphins Make the Playoffs?

Even with a young roster and group of coaches, the Dolphins have dealt with plenty of question marks throughout the offseason. The main one focuses on Tua Tagovailoa, who enjoyed an outstanding rookie season. There were rumors early on that Miami was looking to trade Tagovailoa for Deshaun Watson, suggesting they weren’t fully convinced on their franchise quarterback. While that trade scenario isn’t an option at the moment, there’s a large portion of the NFL fanbase questioning if Tagovailoa is a quarterback that can lead the Dolphins to the next step in their journey.

This article will discuss whether the Miami Dolphins will make the 2021 NFL playoffs with the odds coming from the DraftKings Sportsbook.

Will the Miami Dolphins Make the Playoffs?

This question starts with the Miami coaching staff. Head coach Brian Flores will return for his third season. He worked as a defensive coach for the New England Patriots prior to taking the head coaching job in Miami. He brought Josh Boyer with him in 2019, as Boyer worked as the Dolphins defensive pass game coordinator and cornerback coach. It wasn’t until 2020 that Boyer was promoted to defensive coordinator, resulting in one of the top defenses in the NFL from this defensive-minded duo.

Chan Gailey worked as the offensive coordinator in 2020, designing the playbook specifically for Ryan Fitzpatrick. Although they found success throughout the season, the offense was limited when Tagovailoa was on the field. George Godsey and Eric Studesville will take over as co-offensive coordinators this season. They aren’t an elite duo to get excited about but featuring an offense designed for one quarterback that will play all of the snaps could result in a massive improvement over their numbers last season.

The Miami offense will look drastically different, as they made several upgrades at multiple positions throughout the offseason. The biggest key is that Ryan Fitzpatrick left via free agency, leaving Tua Tagovailoa as the sole starting quarterback on the team. After suffering a potentially career-ending injury at Alabama, Tagovailoa saw his stock fall from one of the best prospects in recent memory to a fringe top-five pick. He flashed as a rookie, throwing for 1,814 yards with 11 touchdowns and 5 interceptions while completing 64.1% of his passes. He added 109 yards and 3 touchdowns on the ground, as well. Overall, Tagovailoa posted a 6-3 record over 9 starts, although he often split snaps with Fitzpatrick. Tagovailoa is a healthy option with a sky-high ceiling, who will be playing in an offense designed for his strengths this season.

The Dolphins did some shuffling in their offensive line in the offseason. First-round pick, Austin Jackson, should continue to progress as a left tackle this season as a 22-year-old. Second-round pick Robert Hunt is expected to start at guard for the second consecutive season. At only 24 years old, he’s another young player that should take a step forward in 2021. Jesse Davis isn’t nearly as young, although he’s expected to start at right tackle once again. Offensive tackle Liam Eichenberg was expected to be a first-round pick in the 2021 draft. He fell to the second round for Miami and is tentatively expected to fill the void of Ereck Flowers, giving the Dolphins another young, high upside option on the offensive line. Continuing the trend, 2019 third-round pick Michael Deiter is expected to take over for Ted Karras as the starting center. There are plenty of question marks surrounding this offensive line with plenty of promise on paper.

The biggest changes may have come in the form of new skill position players for Tagovailoa. DeVante Parker and Mike Gesicki will return as two of his top targets from last season. Miami also added Will Fuller in free agency. Furthermore, they drafted Jaylen Waddle, Tagovailoa’s former teammate at Alabama. Miami also added Hunter Long in the draft, although he may not play a major role in the offense this season. Parker, Fuller, and Waddle all bring something dynamic to the offense that teams will struggle to plan for. They can each change the game in different ways, and this is an offense primed to jump into the top-10 of the NFL in points scored this season.

The best part of Miami last season was their defense, constantly relying on them to keep them in or win games. Luckily, they’re returning nearly the entire defense. Nine of 11 starters on the defensive side will be returning to the starting lineup this season.

Miami added Justin Coleman to take over nickel cornerback duties in favor of Nik Needham. Coleman and Needham graded out as two of the worst coverage cornerbacks in the NFL last season, according to ProFootballFocus (PFF). Needham has the ability to change the game in different ways, though, which is something Coleman hasn’t shown the ability to do. Overall, it’ll be difficult for Miami to get drastically worse regardless of who takes over for Needham, although he’s still on the team and could regain his starting position if they can find a better solution.

Kyle Van Noy is the other departing player, and he will be significantly more difficult to replace in the starting lineup. He ranked third on the team in forced fumbles (2) and sacks (6.0) while ranking second in tackles for a loss (10). The Dolphins are likely to shift their linebackers around, allowing Benardrick McKinney to start in the middle. He only played in 4 games slate season, but he posted 95+ tackles in 4 consecutive seasons for the Houston Texans before that. Miami can use several high upside options to fill the second outside linebacker role when they aren’t in nickel, as well. These options include Brennan Scarlett, Dule Riley, and Jaelan Phillips. Overall, it’ll be difficult to completely replace Van Noy, but their defense isn’t likely to suffer from his absence this season.

The Dolphins are one of the most interesting options in the NFL this season. They returned the majority of their defense, which is where they found most of their success in 2020. They are primed for an offensive breakout, as well, as Tagovailoa should see second-year improvement. They added several game-changing options to their offense in the offseason, as well. Miami is truly a Super Bowl contender this season, making plus odds to make the playoffs one of the easiest season-long bets I’ll write about in 2021.

Bet 1 unit on the Miami Dolphins to make the playoffs (+110) to win 1.1 units on DraftKings Sportsbook