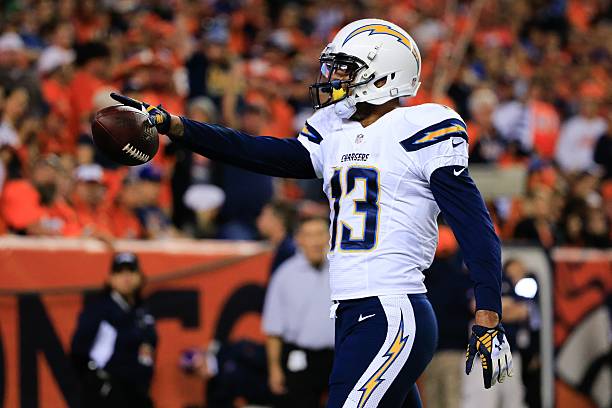 Doing a Prize Picks entry with these two players is essentially a +300 parlay. While traditional sportsbooks normally don’t let you parlay season-long bets, it would only come out to +265 with these two plays, giving us good odds already. Keenan Allen’s receiving yards number is currently 25 yards lower than any major sportsbook’s best number and if you want to bet Toney on a major book then you’re gonna need to lay some juice. I like both of these plays as singles but I’m so confident I’m willing to add them together for that sweet +300 payout. If this interests you, make sure to sign up with either code Karma or Monotone over at PrizePicks. Find out why I love these plays below! 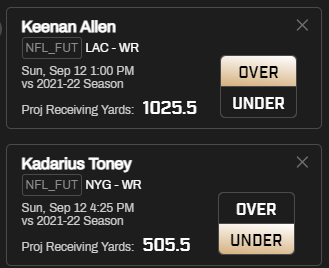 There arent many more reliable receivers in the NFL than Keenan Allen these days. Whether it’s his fellow athletes, such as Darren Waller or Davante Adams, calling him the best route runner in the league, or every single NFL analyst having him in their top 10 receiver list, the consensus is clear, Allen is a beast. Allen’s chemistry with then-rookie quarterback Justin Herbert was on display last season, Excluding Weeks 5 and 15 when he left early with an injury, Keenan Allen saw 10+ targets in all but one game and accumulated a 29% target share in games he finished that was started by Herbert, only Davante Adams was higher.

Beyond even diving deep into that stats, a quick glance at the past seasons will show you that he’s done this in every season he’s played at least 15 games in (which has been 4 times in his career). There are a number of impressive stats you can throw at the wall with Keenan but one of the most is exciting is that Herbert targeted Allen 10-plus times in a game 10 different times in 2020. Allen has slowly seen his target share rise over the years from 8.5 per game in 2018 to 9.3 in 2019 to 10.5 last year. I expect Allen to continue his dominance as the number one receiver for the up-and-coming Chargers.

For anyone not familiar with Kadaruis Toney, he’s a rookie wide receiver from the University of Florida who was picked at number #19 in this year’s draft. Immediately looking at this team’s wide receiver room there are some problems for Toney. This offseason, the Giants paid big money in free agency to acquire Kenny Golladay, presumably to be the #1 target and alpha of this receiving core. After that, we have Sterling Shepard who will finally be able to move back into the slot where he’s most comfortable. With Golladay and Shepard locked and loaded at the 1 and 2 spots you would think, with a number like 505, that Toney would be next, you’re wrong. Last season Darius Slayton surprised many compiling 96 targets, 50 receptions, and 751 receiving yards showing good chemistry with Daniel Jones at times. Even beyond that, he will still be competing for targets with offensive-minded tight end Evan Engram who had 653 receiving yards last season despite many considering it a failure, and young speedster John Ross who had an impressive showing in camp thus far.

When writing out all the competition Toney has for targets it becomes harder and harder to rationalize that number being set all the way at 505. To put that in context, Golden Tate served as the wide receiver three last season and only finished with 35 receptions for 388 yards. Even if you are projecting a breakout year for Daniel Jones, it’s hard to believe that he’s going to be able to support that many wide receivers. Combine that with the return of Saquon Barkley and the fact that Toney has missed all of the preseason thus far, I’m loving the under.