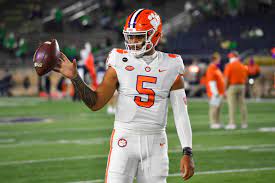 Open your windows and take a deep whiff of the air? Smell that? It’s the smell of College Football Saturdays! One of the most exciting days of the week. For months most of us sat on our hands, praying for the return of College Football. Now that it’s here, each week I will give you my thoughts on particular match ups that I like and big games that need action. For more plays that aren’t in my articles be sure to follow me on Twitter @MrBradThomas.

What an amazing way to kick off the College Football season! A top-10 match up in the opening weekend. For both Georgia and Clemson, this match up has playoff implications. Georgia enters this match up with high expectations and a true Heisman contender in JT Daniels. There’s no denying the fact that Daniels makes the Bulldogs much better offensively. Last season Georgia averaged 8.3 more points per game with JT on Field. This should make up for the absence of playmaker George Pickens and a relatively thin WR Corps.

As elite as Georgia’s defense was last season (19.9 ppg), there will be some concerns with lack of experience in the secondary. I expect Clemson’s ultra-talented quarterback DJ Uiagalelei to be able to exploit the inexperience, which will possibly determine the outcome of the match up. A good example of what to expect comes from the Ohio State vs Minnesota match up. In that game Minnesota was able to slow down the strong pass rush by attacking the younger corners on the field.

Highlighting Georgia’s elite defense without mentioning the talent on Clemson’s defense would be doing them a disservice. Clemson was second in the ACC in scoring defense and tied for first in both interceptions (14) and sacks (46). This defensive front has the ability to be the best in the country. They are returning a lot of talent and have plenty of depth.

This will be a closely contested battle, but with Georgia having the weaker secondary, I believe that Clemson will have the upper hand. I will be playing 1 unit on Clemson -3 (-110).