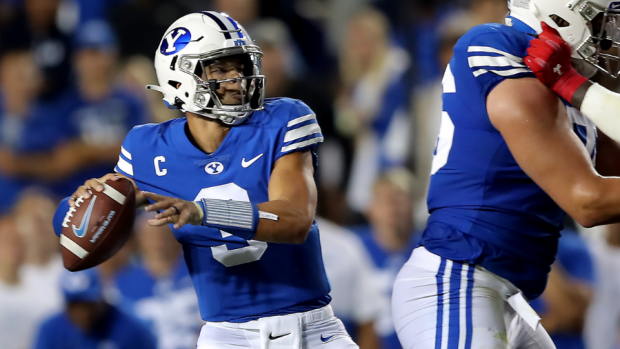 Week six in the College Football season is here and the top four is currently dominated by the SEC and the Big 10. I said this once and I am going to say it again, this is the most parity we’ve seen in College Football in quite some time. I can guarantee that we will not have the same top four teams in as short as a month from now. This weekend I am attacking the Boise State at #10 BYU matchup. I’ve monitored the quarterback situation over the past week to see who would be active for the Cougars. Two days ago, Jaren Hall tweeted that he is on pace to play. For that reason, I will be backing the Cougars. Since the spread is still a bit higher than I’d like, I will be parlaying their moneyline with the Alabama Crimson Tide -10.

Why BYU will win:

The number 10 Cougars have had their ups and downs with battling the injury bug this season. Starting quarterback Jaren Hall was under center the first three games until he was sidelined with a rib injury. In his absence back up quarterback Baylor Romney took over. Luckily for BYU, Romney is an accurate quarterback who likely could start at most schools around the nation. Unfortunately for BYU, Romney left last game with a concussion and is unlikely to play this weekend. However, Jaren Hall is on track to play this weekend. He’s a dual threat quarterback that has the ability to hurt you with his accurate arm or his effortless mobility.

A fortunate brace for the BYU offense is their stout running game. The Cougars are led by sophomore running back Tyler Allgeier. Allgeier has rushed for 569 yards and seven touchdowns while averaging 5.6 yards per carry. Allgeier has the vision and speed to bust a defense wide open and take any run to the house. This will be one of the reasons BYU wins this game. Boise State are terrible against the run. Through five games this season the Boise State defense has surrendered over 1,100 yards on the ground. The Broncos are normally known for their defense but have had a tough go of it this season.

BYU are every bit of that number 10 raking in front of their name. Despite Boise State owning this rivalry recently, it’s BYU’s game to lose. They have the edge in almost every statistical category. With the Cougars having this game at home, I am comfortable backing BYU to win in this match up.

Why Alabama will cover -10:

Alabama travel to College Station as the number one team in the nation. Rightfully so, the defending national champions have had a stellar start to the season. Through five games the Crimson Tide have not trailed all season and have an average margin of victory +25.8 which is good for fourth best in the nation. Star quarterback Bryce Young has filled the void left by Mac Jones and is the front runner for the Heisman trophy.

The Tide are an 18-point favorite when they travel to Texas this weekend. By the play of their defense last game against Ole Miss, it’s evident that defensive coordinator Pete Golding is getting the most out of his team. In the game against Ole Miss, Alabama held the Rebels scoreless in the first half. Coming into the contest Ole Miss led the nation in fourth down conversion. They finished last week 2/5 on fourth.

Jimbo Fisher and company had high expectations coming into the season. It’s difficult to replace the production quarterback Kellan Mond offered. With Zach Calzada, they lack the passing game necessary to give the Tide fits. Much like Boise State, their biggest weakness is their rushing defense. Alabama lost one of their running backs last weekend to a season ending injury but still have a wealth of talent at that position. As long as lead back Brian Robinson Jr. is healthy, he should cause problems for the Aggies.

Texas A&M are 2-3 against the spread this season are out classed and over matched this weekend. Alabama will cover the 10 points and likely cover the original spread.