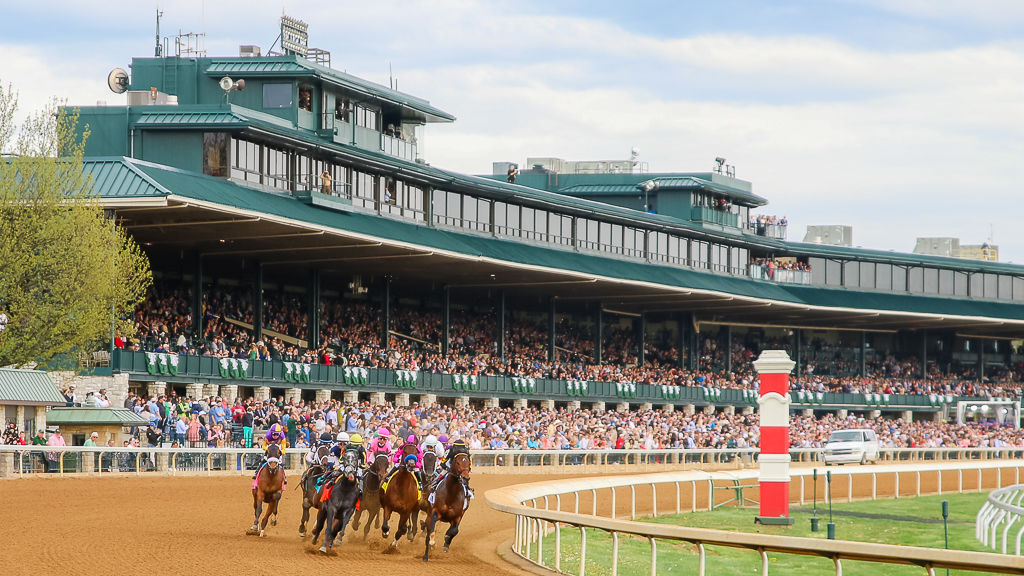 Greetings all! As the leaves begin to change color, the racing action returns to The Bluegrass State to Lexington, Kentucky, where Keeneland Race Course offers a great meet of quality racing. Keeneland is a unique track, as it only runs for about one month in the spring and again one month in the fall. Despite the short schedule, it is loaded with high-profile races, lucrative purses, and many graded stakes winners. Sunday's card has turned up extremely strong, with a series of high-level allowance races, two-year-old stakes, and the Grade 1 Spinster stakes all apart of the late Pick 4 sequence. Let's take a brief look at the Late Pick 4 and see how to approach it, with recommended bets at the end.

The late Pick 4 starts off with a really tough race, an OC80k N2L event for two-year-olds going a mile on dirt. Most two-year-olds have not gone a route of ground at this point in their careers, so this is a big unknown. It's also worth mentioning that the one-mile configuration at Keeneland is rarely used to do the extremely short distance from the starting gate to the first turn. Horses with outside draws are almost guaranteed a wide trip. I'm not interested in the morning line favorite #7 Let's Be Clear. Her three races to date are not fast enough to win, and she isn't a horse that is necessarily supposed to improve with more distance, as she was tiring last out while going shorter. #8 Code for Success is a big player here, as there appears to be substantial early pace in this race and he should be picking them off late. However, his post and run style often don't do well at the one mile configuration of Keeneland, so he could be somewhat compromised here. #5 All Luck showed nothing in debut but looked a new horse when given a chance to run on dirt. The speed figure wasn't particularly impressive, but the second place horse returned to win next out and improved his TimeFormUS speed figure by 16 points. Finally, the #2 Laura's Charm had to drop to the basement to break her maiden, but she did so in impressive fashion. It's unclear whether the drop to claiming ranks or the switch to dirt caused her to produce that effort, but she's worth including at a good price.

Truthfully I don't see what #7 Averly Jane has done to warrant him being made 4/5 on the morning line. Sure, he can win this race, but that's an absurdly short price for a horse who has never raced on the grass and is merely a contender and not a standout based on his dirt races so far. I won't have him on a single ticket as I'm not in the habit of playing favorites defensively, but it's up to you if you want to include him on a saver ticket or not. Beyond him, the race opens up quite a bit. #1 Sonnyisnotsofunny ran a cracker of a race in debut and should be the inside speed today. #2 Kaufymaker is the Ward horse who I would be far more interested in than Averly Jane, as she is proven on the turf and Ward thought highly enough of her to ship her overseas to Ascot. She ran a winning race last out but found the stiff 6.5 furlongs of Kentucky Downs to be a bit beyond her capabilities. A cutback to 5.5 furlongs here makes sense. #3 Detroit City looks too slow on paper, but Jack Sisterson has developed a reputation as a man who wins big races with massive longshots (Lexitonian, Channel Cat, True Timer, Dack Janiel's, Bon Raison, etc). In a race where are already spreading deep, I'll include Detroit City in case this Sisterson Calumet homebred is sneaky live. I will taket as much of #8 Roman Poet as I can get at 50/1 odds, which is absolutely absurd for a horse who owns races over the turf that are nearly fast enough to win and now switches to the always-dangerous barn of Tom Amoss. #6 Bonus Apprecation makes a bit of sense here, but I get the impression he may ultimately want longer than the 5.5 furlongs he gets today.

No need to write a dissertation in this race - #4 Letruska is an incredible race mare and towers over this field. One may look at her margin of victory last out and think she may be vulnerable, but I'd recommend taking a look at that race. Letruska set the lead and multiple horses pressed her, made aggressive middle moves, and denied her any opportunity to catch a breather for the entire race. These weren't cheap speeds that were pressing her either, but classy horses such as Swiss Skydiver, Miss Marissa and As Time Goes By. Any horse that attempted to press Letruska folded badly, as the horses who were 2-3-4 at the first call ended up 8th, 5th, and 6th, beaten over 10 lengths from the winner. Closers dominated that race, as the horses who finished 2-3-4 were 7th, 6th, and 9th at the first call. That speaks volumes to Letruska's grit and tenacity. While it's possible that race may have taken something out of her, there are no clear alternatives, and I'm unwilling to spread in a race where I find the 4/5 favorite this dominant.

The last race of the sequence is arguably the most difficult, as we have a huge field of lightly raced two-year-olds who all look similar. Horses who have raced last out at Kentucky Downs have fared extremely well in their subsequent starts this year. Perhaps the undulating turf course there has given the runners a bit of extra fitness, or maybe it's just the fact that trainers only send their best to compete for the inflated purses at Kentucky Downs. Regardless, both #10 Red Danger and #12 Tiz the Bomb were very impressive KD winners and need to be respected in here. I'd slightly prefer Tiz the Bomb as he is proven at a route, but both are must-use horses. #5 Rocket One and #11 Heaven Street also fit the bill while exiting races at KD, although those races were admittedly much weaker than the aforementioned horses. #4 Martini'nmoonshine may attract support off of his win at Saratoga over a decent field that produced two next-out winners, but I have concerns about his ability to pass other horses if he fails to get the lead. At 10/1 odds, however, it's worth the risk. #3 Dowigiac Chief has a bit of an inconsistent record, but if you discard the dirt races he appears to be capable of competing in here. It was very difficult to win gate to wire at KD this fall, so I have zero fitness concerns about his ability to get the distance today after his impressive score last out.