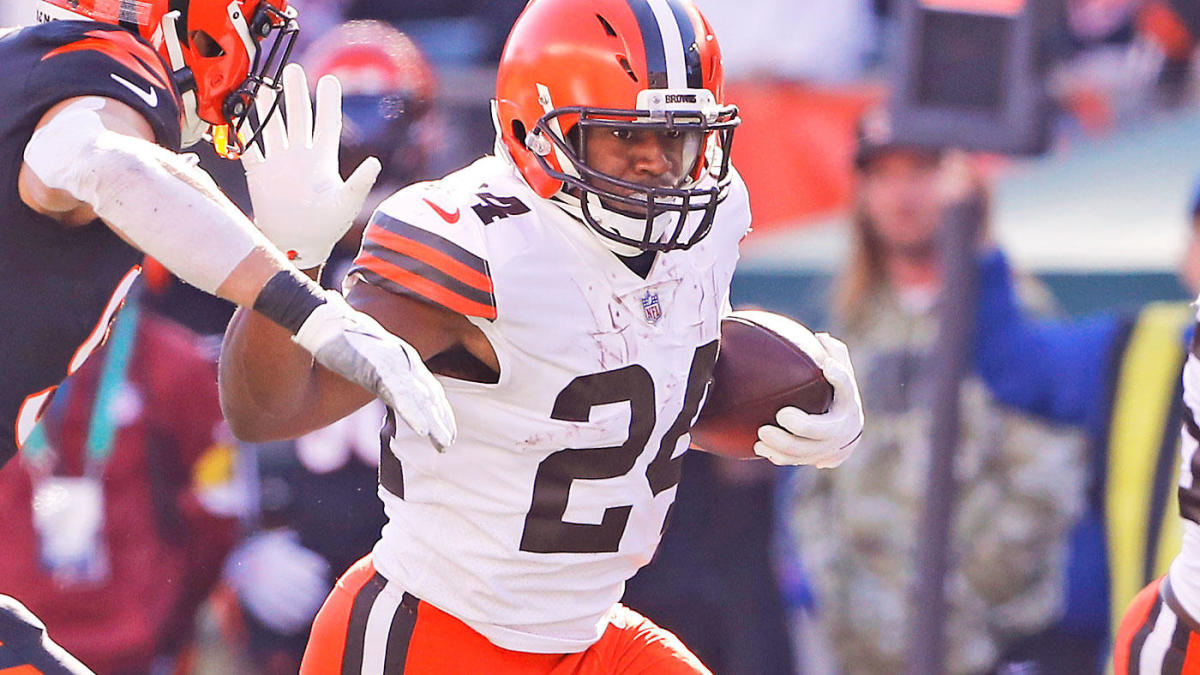 What is up Karma Nation! Welcome back to another week of my NFL Prop Ticket Article. In this article, I will break down my top 5 props of the week. We have an exciting week 11 on our hands. There is plenty of solid matchups and mispriced props this week to take advantage of.  To gain access to the rest of my prop bets join our discord for FREE by going to dfskarma.com/chat or clicking the link above. We continue in the sweet spot of prop betting outside of dealing with the bye weeks. As you could tell based on the last two articles, these middle weeks, 5-12, are where I see my biggest profits. On top of my free play, click the link to get access to all our premium tools on our site. Top props have been fantastic this year. If you locked in all the A- or better props you would be up 14.12 units if you bet one unit on plus money props and to win one unit on minus money props. It has a record of 138-98 (58.4% hit rate)

The Browns will be without Kareem Hunt for another week that means we can load up on Nick Chubb again. Chubb has two games without his star backfield partner Kareem Hunt. In those games, ran for 137 yards and 61 yards. So, two completely different outcomes now we have to figure out the more likely outcome of the two this week. Chubb should produce numbers more in the 100+ yard range compared to the 60 or less range this weekend.

The Browns are going up against the Detroit Lions this week and are coming in as 12 point favorites. The Lions have been horrid against the run all season. Their defense overall has been bad but teams’ trend towards running the ball more mainly due to the game script. Since the Lions have not won a game clearly teams they play will be winning more leading to them milking the clock and running the ball. The Lions have allowed four 100 yard rushers on the season. They are allowing 31 rushing attempts per game, second only to the Chargers. In turn, this has led to them allowing the third-most rushing yards per game on top of that. With the lead in the second half, on first and second down, the Browns run at a 70% rate, ranking 7th most in the league. 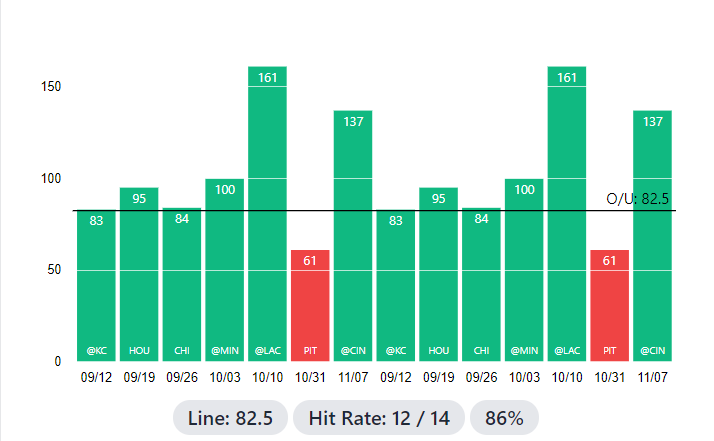 Outside of the Pittsburgh game, he has hit this total in every game this season. It seems like the Steelers have Chubb’s number, which makes sense because they are one of the better defenses in the league. Obviously, he has four games where he has barely gone over but I expect a heavy lead for the Browns and a perfect game script for him to dominate this game on the ground.

On Prizepicks has Chubb at 82.5 as well

Brandin Cooks has been one of the only bright spots for the Texans' offense this season. He ranks 9th in targets, 6th in receptions, 14th in yards, but 47th in touchdowns due to the poor scoring of the Texans. He is averaging 6.3 receptions on 9 targets per game this season. 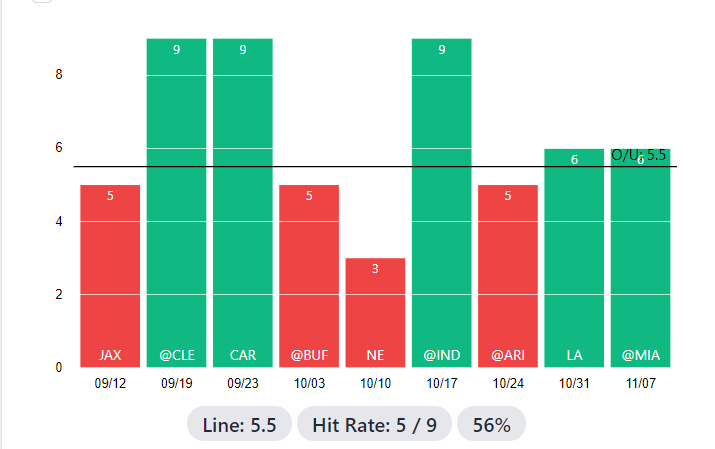 Cooks has hit this number in only 5/9 games but has bubbled in three of those games, which is why I love the number of 4.5 receptions on Prizepicks a lot more. He has at least 5 receptions in all but one game which was against the New England Patriots. Something that was expected as the Patriots love taking away a team’s top option. Especially when they have no other elite options to throw to as we saw with the Falcons game. They took Pitts away and the Falcons couldn't score even a field goal.

Just like we were targeting Chubb because they would have a running game script. We are targeting Cooks due to the negative game script, leading to more passing, that is expected. The Texans are currently 10-point underdogs. Meaning they will be trailing a majority of the game or at least most of the second half. This should lead to plenty more passing attempts for Tyrod Taylor who is already averaging 38 passing attempts per game. That will benefit Cooks a ton this week.

On Prizepicks he is down at 4.5 Receptions

Tua has been a mystery to me this season. He has yet to get a stretch of games where he is healthy so he can improve the chemistry with his teammates with consistent in-game action. 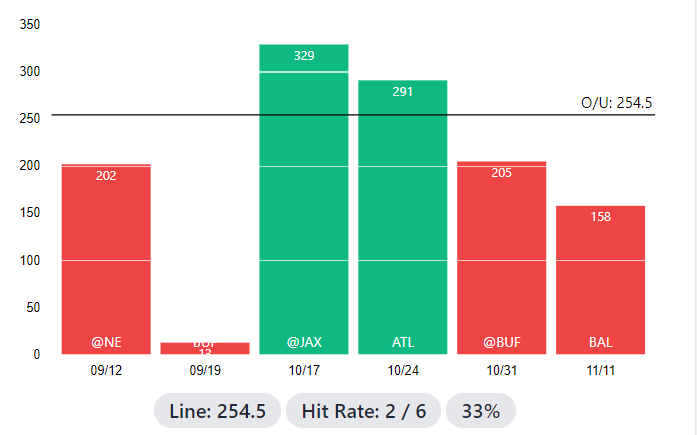 He has technically only hit this total in two of the six games he has appeared in. In the Baltimore game, he came in as the backup for Brissett as he still was dealing with a fracture in his hand. So as a starter that completed a game, Tua has a 50% hit rate. In the two games he went under, were against two of the top 5 defenses in the league, and then other two overs were against two of the worst defenses in the league. Therefore we don't really have a great read on the second-year quarterback yet.

Luckily for Tua, he gets another one of those bottom-tier defenses as the Miami Dolphins take on the New York Jets this Sunday as only 3-point favorites. As a team that is always losing, the Jets have surprisingly allowed 283.2 passing yards per game only tailing the Baltimore Ravens for most passing yards per game allowed this season. Quarterbacks have gone over this number all but twice this season. Those two quarterbacks were part of run-first offenses with heavy leads. Therefore, they did not need to pass the ball.

On Prizepicks he is down at 230.5 Passing Yards

Tyrod Taylor has been consistent with his ability to rack up passing yards for the Houston Texans in the two games he finished. He is averaging 265 yards per game that he is healthy. In the Browns game, he left injured in the second quarter after having 125 yards and looking great. In his first game back against the Dolphins, he looked awful as a QB throwing three interceptions but he did pass the ball 43 times. I expect a much cleaner game for him as he should have shaken off the rust last game and is coming off a bye. 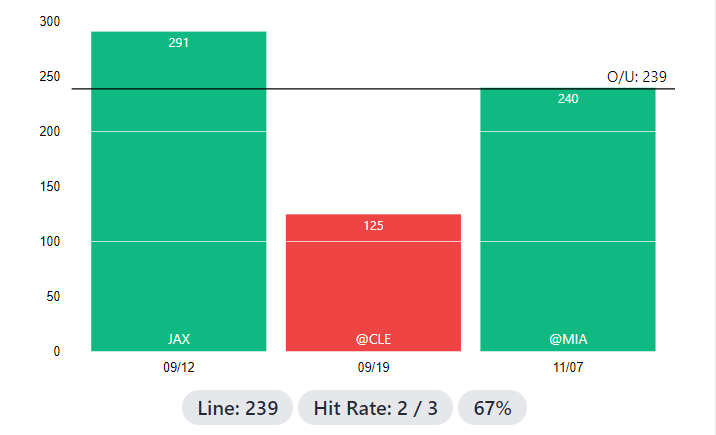 Obviously, the graphic looks a little bad with only a 3-game sample size with one game low due to injury.

Like I mentioned with Cooks, the Texans are 10-point underdogs. This should lead to more passing opportunities for Taylor this week. He also has a prime matchup against the Titans. The Titans are allowing 267.5 passing yards per game. Eight out of ten QBs they have faced have gone over their passing yards prop against them per props.cash. The two unders coming from Carson Wentz in week 3 and that rough game from Patrick Mahomes in prime time. With the Titans no longer having Derrick Henry in the lineup they won’t be able to control the clock as easily with the lead so this should help possessions for the Texans as they should be trailing this game.

On Prizepicks you can get him at 215.5 passing yards

Lastly, we have Tyler Boyd under 42.5 receiving yards. I am not a huge fan of playing unders, but when I do I usually look for big misprices due to over projections. 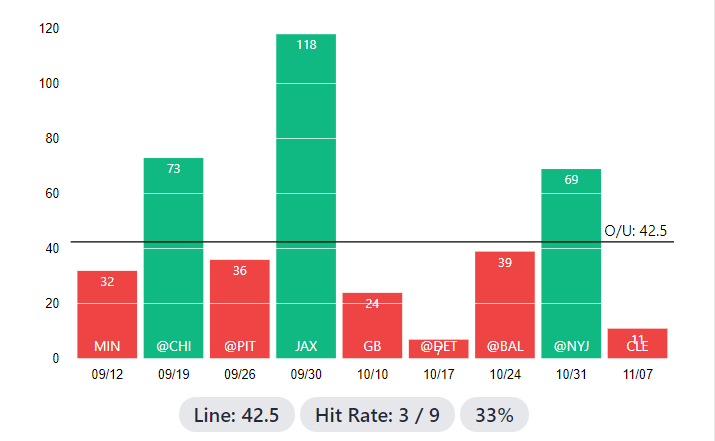 Taking a look at his game logs Boyd has three games going over this total. His one 100-yard explosion game comes with Tee Higgins out with an injury. So, he has gone under this total in two of seven games with a fully healthy receiving core. Tyler Boyd runs a majority of his snaps out of the slot. In the two games he went over were due to dud games from Ja’Marr Chase while in a great matchup in the slot against the Bears and the Jets. In games with Higgins out, he is averaging 77 yards per game on 8.5 targets in two games. With Higgins in, he is averaging 36.4 yards per game on 5.43 targets in seven games.

This is a matchup-based play as well. I highlight his matchup in my WR/CB article, but the quick summary of this matchup is that 5th round rookie Nate Hobbs has been one of the best value picks out of this year’s draft class. He ranks second in coverage snaps per target allowing only a target every 9.2 routes covered. He also ranks 4th best allowing only 0.8 yards per route covered. I expect Hobbs to shut down Boyd this week leading to an easy under.

On Prizepicks he is down at 30.5 Receiving yards so you get better value on the books