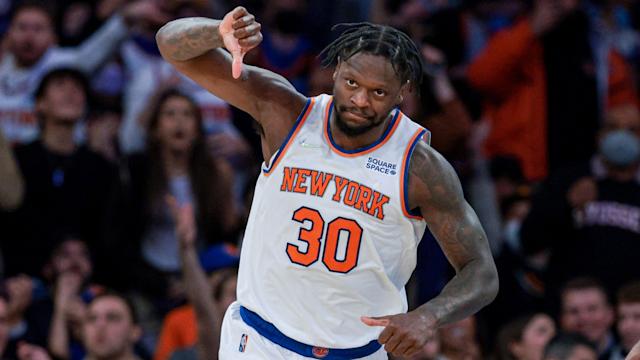 What’s going on, Karma Nation! We have eight games to choose from with our NBA prop bets Monday night. Let’s get right into it, starting with Julius Randle vs Sacramento Kings.

Julius Randle has come under fire from the fans and media at Madison Square Garden this month. Between giving fans the thumbs down gesture, to making himself unavailable to speak to the media over the last few weeks, it’s been a rocky January for Randle. On the court, Randle is playing his worst basketball as a Knick, as New York starts to slip in the standings. Randle has been under 18.5 points in 8 of his last 11 games. In that span he is shooting 37.6 percent from the floor. There is talk now that after inking a huge extension last summer, Randle could actually be available via trade at the deadline. We like to keep things positive with these articles, so I don’t do a lot of unders with these prop bets, but Randle under 18.5 points is just too appealing. Scottie Barnes has been a revelation for the Toronto Raptors through the first half of his rookie season. Barnes has hit this over in three of his last four games. In addition, the Hawks are playing on the second night of a back-to-back. This Hawks team on the best of days are challenged defensively, allowing 111.3 points per game this season, 23rd in the NBA. While the Hawks are better on that end of the floor with De’Andre Hunter back, Fred VanVleet and Pascal Siakam also are going to be scoring at will tonight and will require Hunter’s full attention.

Pascal Siakam vs the Atlanta Hawks

Yes, we are loading up on Raptors front court players tonight for all the reasons mentioned above. In addition, Siakam is playing his best basketball of the season this month. Siakam has been at 20 points or more in 9 of his last 11 games. The Atlanta Hawks are allowing 47.3 points per game this season in the paint. That’s 19th best in the NBA. It’s unclear if the Raptors intend to keep Siakam around long term to pair with Barnes but for now, there is no reason these two cannot both thrive in Atlanta tonight