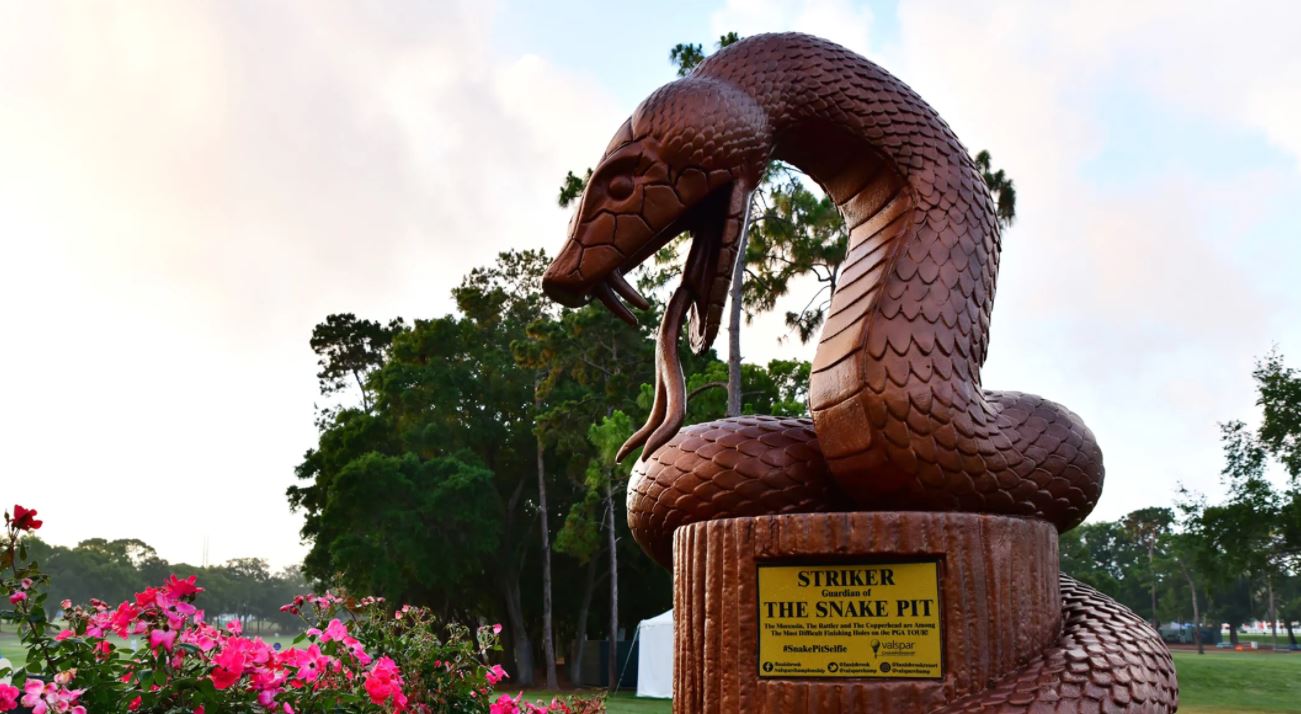 Congratulations to Cam Smith on winning The Players and overcoming the difficult playing conditions and taking home the highest single tournament payout in PGA Tour history with a fat $3.2 million dollar direct deposit. The tournament took four days to complete with two of those days being absolute carnage on the golf course. There were a lot of big names that missed the cut and others, like Scott Piercy and Xander Schauffele, that had a couple of bad holes that took them from contention to completely missing the cut.

This week is the Valspar Championship and is a surprisingly strong field considering it follows The Players. This week the Innisbrook Resort and Copperhead Course play host to the Valspar in Tampa. Once again, there is rain and storms in the forecast where we could see similar playing conditions to last week. The Copperhead Course has the “Snake Pit” which is similar to the idea behind the “Bear Trap” a couple of weeks ago at PGA National. The Snake Pit is the three-hole stretch from holes 16 to 18 and is comprised of a 475 yard Par 4, a long Par 3 with a false front that punishes short shots, and the an exciting finishing hole with a Par 4 that can lead to bogey or worse if placement off the tee is less than ideal. This course is lined with trees and littered with doglegs that makes finding the fairway a critical piece to compete here. Per usual, strokes gained on approach will be key this week as well as finding greens and making birdies while avoiding bogeys. I know—this sounds pretty obvious but winners here in the past have avoided the big numbers and gain strokes with great iron play and ball-striking. Looking at past champions like Sam Burns, Adam Hadwin, Kevin Streelman, and Luke Donald it is easy to see that being long off the tee should not be an advantage and the primarily shorter, more precise hitters will have a clear advantage this week.

If you are a member of the BetKarma Discord Channel then you saw my post that I was betting an outright on Russell Knox late Wednesday night before the tournament started. Knox was in contention during the final round of the Players before eventually dwindling and finishing T-6. Knox does have two Top 10s in his last seven starts and also has three other Top 35 finishes. This is a course that sets up nicely for him where he is not punished for his distance and is rewarded for his accuracy, approach game, and putting. Knox is 10th in driving accuracy and 2nd in greens in regulation. His GIR is aided by his Top 10 ranking in strokes gained on approach. He pushed through the poor playing conditions last week in the strongest field of the year and posted a Top 10. He has four Top 25s here so I can see him competing to win here and at the least, post a Top 20 and build on his strong performance last week.

There were two guys that I liked here at this number with Kokrak and Mathew Fitzpatrick—I decided to bet the former. He has made his last eight cuts hat included a win at the Houston Open back in November. Last week wasn’t a great showing but I’m not holding that against him given the playing conditions. Before that, he had finished T-26 or better in his previous three starts. One of the things that I do love about Kokrak this week is his ability to get a hot putter and his course history. Aside from a 58th place finish in 2017 and missed cut in 2016, Kokrak has not finished worse than 14th. He has five Top 15 finishes including three Top 10s. I may place a bet on a Top 10 finish for Kokrak as well.

Ancer has not been in the best form lately and hasn’t posted anything better than a T-33 in his last six starts. With that being said, he is still one of the better players in the world and can compete any week, especially at a course like Copperhead that requires accuracy off of the tee. He ranks inside the Top 10 in driving accuracy this season while he is losing a lot of strokes on approach and missing the greens. If he can just turn around his approach game, even nominally, then he can easily post a Top 20 or better here like he has in his only two appearances at the Valspar where he finished 5th and 16th. I see a lot of value here and see Ancer turning it around this week.