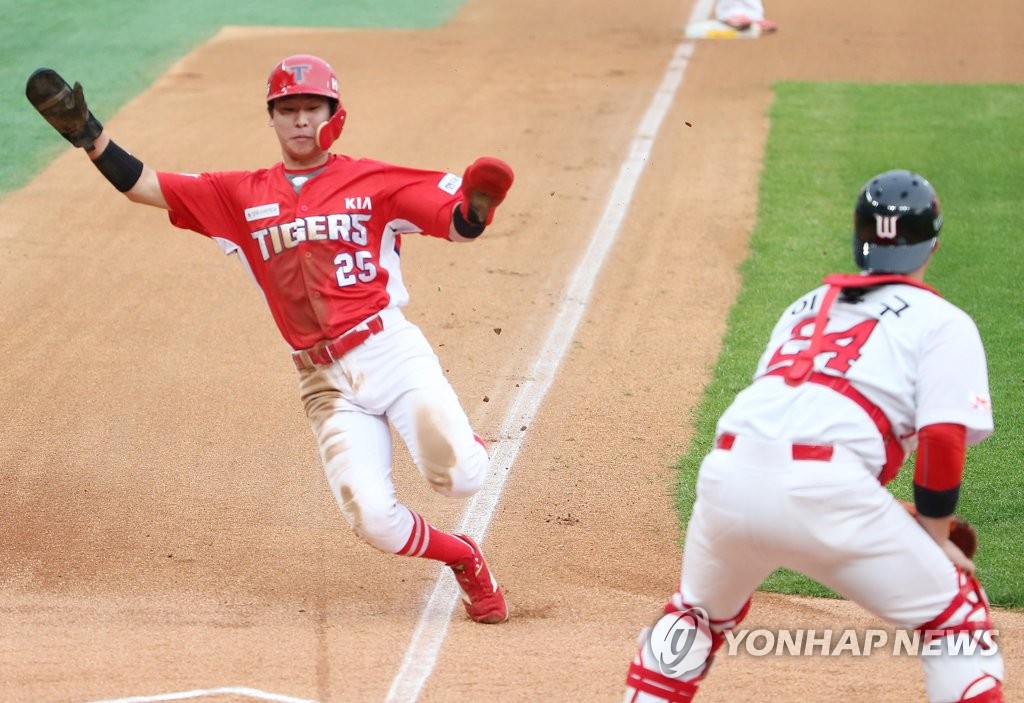 Welcome to Night 27 of KBO Writeups! After a crazy last week that involved games as high-scoring as 28, a multitude of extra-inning wins, and some wacky happenings, we're back for more KBO. This writeup covers 3+ games, and spans more than 5 pages, so I'll save you the intro and let you get into it!

As my readership knows, I’m extremely high on using as many advanced analytics as possible to decipher whether a pitcher’s success (or lack thereof) is sustainable in either direction, or where I point them heading. That being said, I’ve watched Seo pitch several times, and while I think he’s a pretty solid KBO arm (and so do the Giants, given his signing bonus), the analytics absolutely hate him. His 3.71 ERA pales with a 5.61 FIP (consistent with a 4.98 FIP last season), and I can easily see why his FIP is that low. His strikeout rate is a putrid 11%, and a BB/9 of 3.09 isn’t necessarily impressing anyone. Additionally, he’s stranding runners on base at an extremely high percentage, and his BABIP is low. So, given all these things that I typically point at as extremely likely signs towards negative regression, you may be wondering why I’m not highlighting Seo as an extremely typical candidate to fade. The reason why lies in his deceptive delivery and propensity to deliver soft contact. Pitching from a low ¾-slot with some velocity, Seo has done an incredible job limiting XBH, giving up just 8 over 43.2 IP. This conclusion is supported by his hard-hit ball rate, which ranks in the top 15 in the KBO, meaning that while his extremely low BABIP is likely going to regress, it may not regress all that much. The command issues are definitely there, which is what separates Seo from the elite class of pitching, but I don’t think he’s as bad as people would necessarily suggest, and I wouldn’t be surprised to see him get through 5 or 6 halfway decent innings tonight. All that being said, I am still siding with the Kia side of this matchup, in part due to their offense and in part due to their pitching (more on that soon). Additionally, the Tigers clearly saw something they liked last time against Seo, as they torched him for 11 H / 7 ER over just 4 IP, hitting three home runs along the way. Unfortunately, since that outing, Seo has improved significantly, and Kia lost two of their better hitters (one of whom went 4/5 with 2 RBI in that game), so I see this being a more even affair. However, Seo’s command issues will make it tough for him to generate consistent success, and I see Kia scoring a few runs in the early going and taking a lead they’ll hold on to nicely, with the potential to add a couple more against Lotte’s below-average bullpen that will most certainly be in play, considering Seo hasn’t made it through more than 6.2 IP in a single outing.

The KBO’s leader in generating soft contact, Brooks is one of second-favorite pitcher in this league (after Chang-mo Koo) for multiple reasons. His control is terrific (1.50 BB/9), strikeout rate is serviceable (21.9%), he limits XBH (8 in 48 IP), and his FIP is nearly exactly the same as his ERA (3.01), all suggesting that he is here to stay. Brooks was extremely solid in his last outing vs Lotte, striking out five and giving up 2 ER over 6.2 IP, including shutting out the Giants through five. With a fully rested bullpen behind him, Kia won’t need to overextend their starter, and this is a great spot for him to give 5-6 really good innings and turn it over to an above-average pen. Brooks has given up more than 3 ER exactly once in a start this season, and five of his eight starts have resulted in 2 or fewer ER, all of which lasted 5+ IP. This is all to say that Brooks is dependable for solid results, and in a very positive matchup vs Lotte here I love his potential to put it all together for a terrific outing. While they have their moments, Lotte just isn’t a very good hitting team, and I don’t see them scoring any more than 2 against Brooks, if that. Even if Seo brings his A-Game, Brooks is a better pitcher and Kia is a better offense. This is a game they should win around 5-2, with Brooks going six and the top Kia relievers finishing the job.

After making terrific strides over the past two seasons, Kim has seen extreme regression in 2020, which matches up with his complete inability to command the ball. He’s walked 3 or more hitters in 6 of his 7 starts this year, including five vs LG two weeks ago. This has completely negated the fact that he’s actually done a really good job limiting hard contact, giving up just 8 XBH this season (only 2 HRs). The one thing Kim has going for him in his matchup tonight vs Doosan is the fact that he’s left-handed and Doosan starts 5-7 lefties, and in the past, I’ve held off on Bears plays when they lack the platoon advantage. That being said, it’s just not possible to lay off the matchup here, at least until Kim shows some of his old ability to command the ball. Against LG – a team also built up of majority lefties – Kim presented the following statline: 5.2 IP / 3 H / 5 BB / 3 ER. This isn’t necessarily terrible, but it’s pretty clear that it could have been way worse, and Doosan is a better-hitting team than LG, particularly on the road outside their spacious ballpark. At some point, you just have to see that Kim is clearly struggling to put good starts together, and he hasn’t had a quality start since his second appearance of the season. I don’t necessarily expect Doosan to score 10 runs or anything in that vicinity, but this is a game they should for sure plate 4+, and if they start hot, the Bears could get there in the first five innings while Kim is still in the game. In an ideal scenario, he throws far too many pitches early and SK turns to the back of the pen, which could mean Doosan breaks the game open and runs away with it quickly.

While Flexen hasn’t been as good of late as he was near the beginning of the season – perhaps stemming from a hamstring injury he suffered in early June – he has a perfect opportunity for a bounce-back outing tonight vs a struggling, majority-righthanded SK lineup that he looked solid against earlier this year. His ERA is supported by a 3.77 FIP, and pretty much the only thing to pinpoint about Flexen’s season in a negative aspect is that his command has struggled significantly, including 3, 4, and 5 walks in three of his past four outings. This is clearly an issue, but he’s still done a pretty good job at limiting hard contact, giving up just two home runs on the season. While SK does have a few power bats in their order, they don’t have much depth, so Flexen should be able to work around those guys and isolate the rest of their order, so long as he doesn’t run into too much command-based trouble. His best start of the season was an 8-inning, 10-strikeout, 1-run performance against NC, and while that may seem like an outlier in the strikeout category, it is an indication that he can and should compete in this league. Flexen, who I assume will be at or near full capacity pitch-count-wise today, should be in a great spot to limit SK to a run or two, and even if they get a few on the board early, Doosan has a huge mismatch vs Tae-hoon Kim, and their bats will keep them in the game. This is one they have advantages on both sides of the ball in, and I think the famous Bears road offense carries them to victory here.

Choi has had a pretty up-and-down season, with three of his six outings consisting of 1 ER or less, and the other three of 4 ER or more, including two disasters over his last two starts, both of which occurred 3-4 weeks ago after a head injury cost him 20 days. On a typical night, he’s somebody I probably pass on and watch to see whether his regression is temporary or permanent, particularly after an injury. However, when you’ve got a lefty facing Hanwha who’s flashed some real success this year and is a former top pick, you have to look twice. It’s pretty clear that Hanwha is in a bad place, and they just cut their only foreign hitter, leaving them with even less bang in the box. Additionally, their starting lineup consists of five lefties on a typical day (including their top-three hitters), so Choi will have the platoon advantage most of the game, something that served him well against LG, a team that also starts around five lefties. Choi may not be the most dominant arm the Eagles face this season, but there’s definitely value here as a bounce-back start. If he manages to contain the Eagles to a few runs – which I think he 100% should do – Samsung will be in a terrific position to win, since Hanwha’s Chad Bell has been nothing sort of a confounding disaster this season, and I don’t expect it to turn around just yet. This is a good test for Choi – if he can’t come through tonight vs Hanwha, he’s in a serious slump on the mound. One of the great things about Samsung is they do have some legit arms in their bullpen, so we don’t need Choi to go 7-8 innings; in fact, 5 good innings and out is about the best he can do on the mound, and anything more than that is purely a bonus. I think the time off will help Choi refocus and get ready for tonight, and if anything, he has the softest matchup in the league to come back to. I expect Choi to be decent at worst, with the potential for a really good start if he is locked in.

Let’s just say that the 2019 and 2020 statlines from Chad Bell do not much resemble each other. Since he’s returned from an elbow injury in late-May, it’s extremely obvious that Bell is nowhere near the same caliber pitcher that he was last year, and it’s very probably that something is wrong with him still. He’s been absolutely blown up by SK, NC, Doosan, and LG consecutively, and while Samsung isn’t the same caliber team as the latter three, they’re pretty similar to SK and have a majority platoon advantage over the left-handed Bell. I was pretty cautious about betting against Bell the last few weeks, since sometimes pitchers take an outing or two to put it together, but the signs can’t be more clear that all is not well right now, and while I hope he figures it out at some point, I don’t see a road matchup against Samsung being the time for that to happen. The Lions faced some extremely tough pitching vs Kia last week, and I’m guessing they’re extremely excited about this matchup vs Kia. Bell has upped his ante to around 100+ pitches, so this isn’t a game Hanwha will likely have to use a ton of their pen, but if it’s at all out of reach, Samsung should dominate the back-end arms and coast to a victory. This is a great spot for them to score 3-4 in the early going and tack on 1-2 more through the game, while Choi gives the Lions 6 good low-scoring innings. Until Bell shows sign of being a competent pitcher again, there’s really no choice but to bet against him.

ADDITIONAL GAME PLAYS (not writing this up, but these are all official):