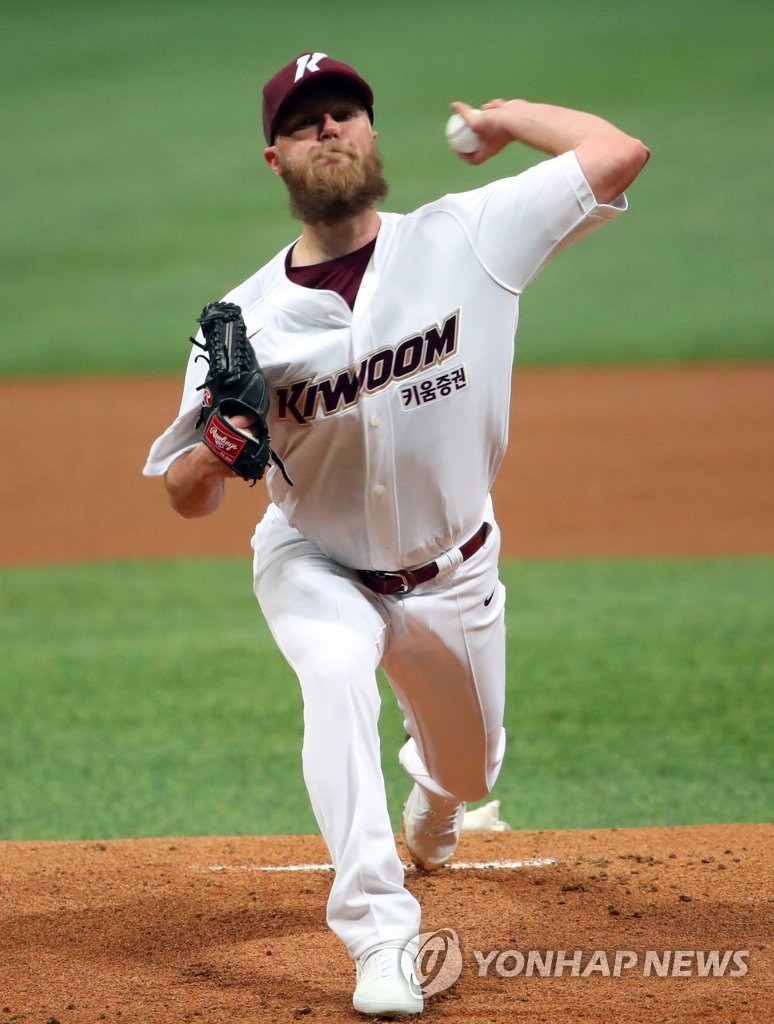 Got a decent amount of writing ahead, so I'll save the recap and intro for a longer one tomorrow, and let you jump right in!!

Jokisch is the perfect pitcher to face Kia for a few reasons, and I’ll quickly list them here. First, he limits walks, meaning that the top of the order will have fewer opportunities and the bottom shouldn’t be hitting with many (if any) runners in scoring position. His BB/9 is an outstanding 1.46, and it hasn’t seen any regression throughout the course of the season, as he’s walked a combined two batters in his last 13 innings. Second, he holds a platoon advantage over three of Kia’s best four hitters (including foreign slugger Preston Tucker, who went 0/3 against him in his KBO debut in early May), again contributing to the fact that Jokisch will force the shallow back-end of the Kia lineup to put runs on the board, which they have consistently struggled and oftentimes been entirely unable to manufacture. Kia has clearly worked at a defect against pitchers with decent command and ability to limit hard contact, and that’s exactly what we have tonight with Jokisch. He’s been limited to around 90-100 pitches/start, but that hasn’t stopped him from going at least 6 in every single start this season, with the exception of his season debut against Kia (where he went 5, allowing just 1 ER and striking out 4). Jokisch dominated SK at home in his last outing, and starting again in his home ballpark he should be in a terrific position. I wouldn’t be surprised if Kiwoom extends him a little bit given their tough slate of games recently, but that doesn’t bother me, since he’s been equally effective in practically every inning thus far. Jokisch’s peripherals support this start – his FIP ranks near the top of the league at 3.23, and his aforementioned BB/9 is top-five – and I think he’ll put together an extremely solid, and winning, start tonight for the Heroes.

You will probably immediately notice a difference between Yang’s 2019 and 2020. Much of his 2020 decline comes from three really bad starts – against Samsung, KT, and Kiwoom – and the rest have been decent, though unspectacular. Looking at Yang’s 2019 stats, it seems to have been an extreme outlier in his career. Other than that season, he’s never had a FIP below 3.71, and only been below 4.00 twice in 14 seasons. He’s back around a 4.52 this year, which likely stems from a combination of being unspectacular with his walk rate (2.44 BB/9), strikeout rate (18.6%), and ability to limit hard contact (18 XBH in 48 IP, including 1.13 HR/9). This is a bad team to be prone to allowing XBH against, considering Kiwoom’s calling card is their power, and they just grabbed one of their better hitters back off the injured list. For what it’s worth, the Heroes have been hot recently, scoring 9, 7, 8, 5, 8, and 6 over their last six games, including against some semi-decent pitching. Their power is predominantly right-handed (other than their 3-hole), so the majority of the order should hold the platoon advantage, which will help even more. Until Yang starts turning things around consistently, there’s not really a reason to bet on him. He looked bad against Kiwoom last time and is just coming off an absolute shellacking at the hands of Samsung. Kiwoom holds a clear advantage on both the pitching and hitting sides of things, and if Jokisch can get into the 6th or 7th, he’ll give the bullpen a shot to close it out and even it up for the Heroes in the series.

Kim has two things going for him: he’s a surprisingly efficient strikeout pitcher, and he had a pretty good start to the season. Other than that, things are pretty bleak. Over his last four outings, Kim has put up a statline of: 16.1 IP / 28 H / 18 ER / 6 HR (against SK, Kiwoom, Lotte, and NC). This is not good, italicized for emphasis, and now he gets to face a finally-healthy offense that has had to battle through some really tough pitching but is still as potent as ever, especially against righties, where their dangerous 2-3-4 hitters all hold the platoon advantage. Mel Rojas and Baek-ho Kang are legitimate threats to hit the ball 110 MPH every at-bat, and all it really takes is a few runners in front of them for something to click. Kim has made it past 5 innings exactly once in his last five starts, and that was in a game where he still gave up 8 hits / 4 ER, so I wouldn’t exactly have a problem with Hanwha lengthening him out if it means he’s getting hit hard. Furthermore, the Eagles ran through several of their better relief pitchers last night as they held KT off down the stretch, meaning they’ll have to rely more on younger guys who are primed for explosions at any time. KT will have runners on base, and if they manage to limit strikeouts and put the ball in play hard – which they should – they’re going to score runs and force Hanwha’s bullpen to enter sooner rather than later. A 5.71 FIP and 3.35 BB/9 scream disaster waiting to happen, and KT is a team that thrives off free passes that allow the top of the order to hit with RISP. Rojas and Kang will feast, and KT will score 5+.

After a terrific 2019 intro to the KBO, Cuevas has really fallen off this season, but there are a few reasons I’m not panicked. He’s been dealing with a hip injury since practically day one, and after finally being given a few weeks to rest, he came back with a bang, throwing 7 beautiful shutout innings vs Lotte, striking out five and throwing just 85 pitches. He should be back up to around full strength tonight, which means in the range of 100+ pitches and a limited exposure to the KT bullpen. This is terrific news for bettors, who by now are terrified of any game involving more than a few innings of this Wiz pen, which is simply horrible and never ceases to amazing (or dismay). Hanwha’s offense has looked good over the last two games, but I’m attributing that to a product of some pouring rain and a terrible KT starter, rather than some dramatic change in the Wiz offense. If they light up Cuevas, maybe I’ll change my mind, but I think that he’ll continue his strong return post-injury and shut down Hanwha. Even if he does give up a few runs, this is a game where the Wiz should score at least 4-5, and I doubt Hanwha gets close to that.