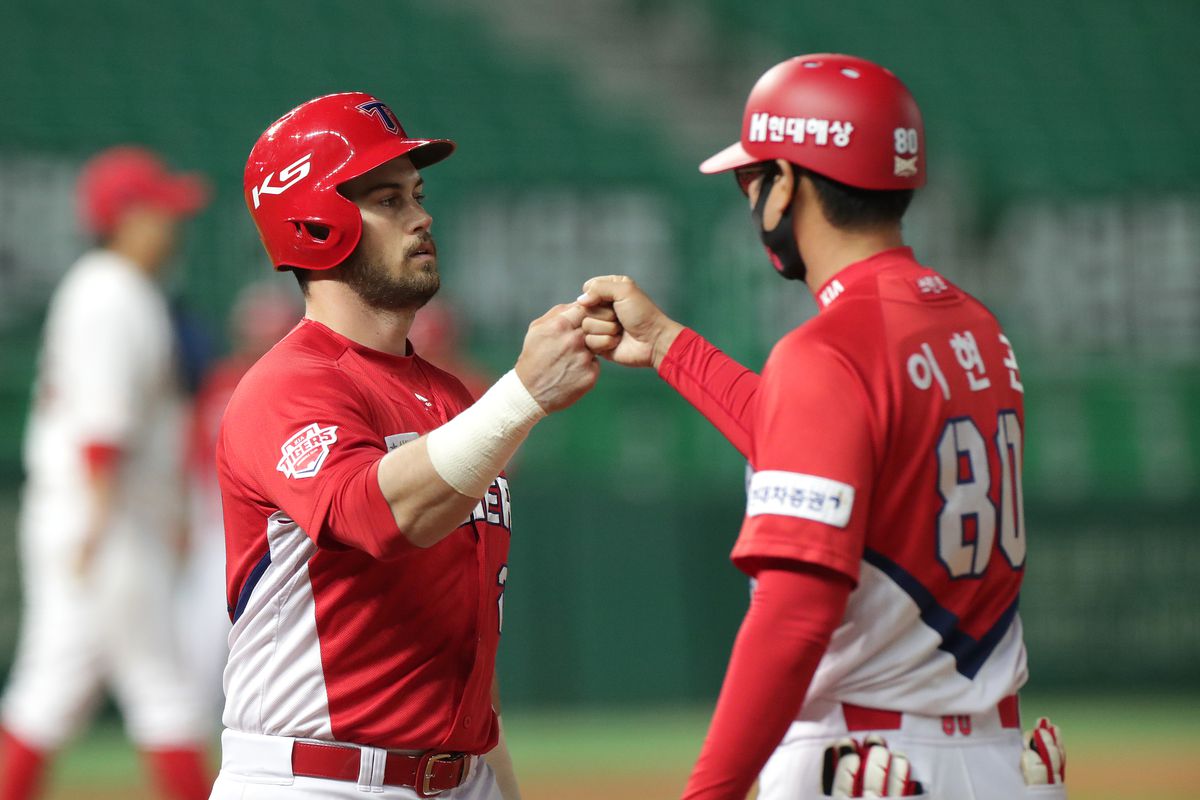 I can’t express how excited I am about this slate!! There’s a ton of diversity in these picks, and all the games should be exciting to watch. A long recap will be coming tomorrow. For now, please enjoy the picks.

LINES ARE NOT HERE ANY MORE, I SUGGEST YOU REACH OUT TO ME FOR MORE DETAILS IF YOU WANT EARLY TIPS ON PLAYS LIKE THIS

We start tonight with not only my favorite pitcher on the slate, but the pitcher with by far the best matchup. Im, who ranks 2nd in the league in hard-hit ball % (12.1, just 0.1 behind leader and teammate Aaron Brooks), 6th in FIP, and 7th in ERA, has the tremendous opportunity to face a team that ranks last (by a pretty considerable margin) in almost every possible hitting category. To put it simply, this is a match made in heaven. Im hasn’t allowed more than 2 ER in any of his last four starts, and just once in his seven (3 against KT on May 27th). He’s only given up 2 HR the entire season, both of which came in the same outing. Furthermore, his command is practically impeccable, with a 1.45 BB/9 that ranks 2nd in the KBO, just behind Kiwoom ace Eric Jokisch. This is a guy who’s analytically sound and passes the eye test, with stuff that produces enough strikeouts to be high-end in a contact league. I like Im in any matchup, but Hanwha is just so bad, and anyone who thinks otherwise is being swayed by a tiny sample size of recent “success” that they’ve had, which came against some of the worst pitching in the KBO (and a 9-run explosion in a game in the midst of a torrential downpour). Color me completely unconvinced. I’d be shocked to see Im allow more than one run tonight, and I don’t see Hanhwa scoring more than two as a whole. Kia’s bullpen has been spotty at times, but it’s still one of the best in the KBO, so Im will have some nice backup after he exits. This is also a terrific spot for any DFS players – he’s an absolute no-doubter in your starter spot. Lock Im in for 6-7 IP, less than 2 ER, and an extremely quality outing.

Jang is the exact opposite of Im in that he’s practically a model of inconsistency. His last start was dreamlike, striking out 9 over 5 IP with 1 ER, but in his prior 20 IP he had allowed 20 ER. Not ideal. In an appearance vs Kia earlier this year, Jang had perhaps the worst control outing of the KBO season, walking six batters and giving up 7 hits en route to 3 ER (4 runs total). His control is absolutely awful, as he’s walked less than 2 batters in an outing exactly once this season and has walked 3 or more in five of his eight outings. This is extremely concerning against the Kia offense – if you recall my prior writeups, this is an offense I fade against control, and stack against a lack thereof. The Tigers don’t have a ton of depth in the bottom of their order, but they have some mashers at the top (including two terrific lefties), and they have consistently hit better as a team against righties than lefties this season (.294 AVG/.434 SLG against righties, .228 AVG/.387 SLG vs lefties). This is an ideal matchup for them in that they’ll have a chance to score some runs early and give Im a lead that he should have no trouble protecting. I don’t necessarily expect Kia to score 7+, because they don’t really have the firepower for it, but I have their magic number at 5. If they get there, consider it a cover.

AS WITH PRIOR GAME, LINES ARE NOT HERE ANY MORE. I CAN’T REACH OUT TO EVERYONE INDIVIDUALLY TO SUGGEST THESE PLAYS, SO IF YOU WANT TO DISCUSS EARLY NOTIFICATIONS, PLEASE DM ME.

I’ve done crazier things than this, but betting against Doosan on the road vs a pitcher with an ERA around 5.00 may come across as outlandish. However, it’s pretty clear that Lee has some underlying positive tendencies that play particularly well in this matchup. By far the most important is that he’s left-handed, and practically dominated left-handed hitting this season. His split stats read as the following (enjoy my personally created tables):

First, let me state that I hate batting average as a statistic, and only have it in here as a frame of reference. Moving into things I consider far more important, it’s extremely clear that while Doosan may hit for the same average (and Lee actually allows a higher batting average to lefties than righties), the run production is nowhere near close for Doosan vs lefties like Lee, and Lee vs lefty-dominant teams like Doosan. Lee’s ISO against lefties is absolutely elite (for comparison, Chang-mo Koo’s ISO vs lefties is 0.042), and with Doosan potentially starting 5+ LHB, I love his chances tonight. LG and NC are similarly lefty-heavy teams, and Lee’s last appearances vs them combine for: 11 IP / 2 ER / 6 K / 0 BB. Not bad! He’s a bold play, but I love the matchup, and think he has the potential to limit Doosan to around 2 ER over 5 innings and turn it over to a solid Kiwoom pen to work some matchups and run the game to its close.

Yu is one of the most mystifying pitchers I’ve ever seen. He literally sits 79-82 MPH, and threw a curveball around 55 MPH last weekend. I have absolutely no idea how he’s survived this long, but he somehow has practically thrived in the KBO for 8 years. That is, until this season, where it appears Yu’s luck has finally run dry. He’s been roundly shelled in nearly half his outings, including a 2.1 IP / 11 H / 6 ER shellacking by SK last weekend. He’s completely reliant on BABIP, and tonight faces the hardest-hitting team by percentage (just over the Twins) in the KBO. Furthermore, Yu is a lefty, which serves him poorly against a Kiwoom team that features 3-4 power right-handed bats, and a few speedy lefties that are equally proficient against either side. Using all the available data I could find, Kiwoom’s splits are higher in terms of batting average, slugging percentage, and ISO against lefties than righties, data that doesn’t surprise me given their aforementioned right-handed mashers. Honestly, I’ll say this: Yu could somehow defy all laws of physics and induce Kiwoom to ground out softly 18 times in a row. But I’m going to side with Heroes hitters here, who profile similarly in terms of makeup to KT, who torched Yu for 9 ER / 17 H over two starts combining to 10 IP. Yu’s FIP is a poor 5.45, he strikes out literally nobody, and even his trusty BB/9 has fallen to fairly average at 2.27 BB/9. Kiwoom will have traffic on the bases from start to finish, and they’ll consistently be a swing or two from cracking it open completely, which I believe they will do sooner rather than later.

Wright is a confounding case of a former Major Leaguer who really just hasn’t been any kind of dominant in the KBO. His command is shoddy, he doesn’t strike out too many guys, and he gives up a decent amount of contact. However, he has done a fairly excellent job limiting runs (other than his second-to-last start, against Kia), and he ranks 5th in the KBO in hard-hit ball percentage. In general, I’m not really super high on Wright, but I’m extremely low on Lotte. They really don’t have any kind of power in their lineup, and with it being majority right-handed (8 out of 9 starters), Wright will be able to beat guys inside and have a pretty high level of success. While he’s not someone I’m going to day-in day-out, he’s only given up 10 XBH in 50 IP, and just one home run in his last 22 IP, which I’m interpreting as an encouraging sign that he’s making progress in this new league. Facing Lotte is a good spot to continue that progression, and I don’t see the Giants putting up more than a few on the board against him, which should be easily enough for the Dinos offense to cover, given the murkiness of Lotte’s pitching layout tonight. While I’m not going to go heavy on Wright every night – until he demonstrates consistent dominance – he’s got a great opportunity here to shut down a weak Lotte offense.

Well, this is confusing. Kim literally hasn’t started one game in his entire KBO (which bizarrely began in 2009, then he disappeared from 2010-2018), didn’t pitch in a game last year, and has thrown a maximum of 30 pitches in his appearances this season (that game he got shelled for 3 ER in 0.1 IP, against Samsung…). I found some record of his 2019, which took place entirely in the Futures League; he was decent, pitching to the tune of a 2.57 ERA, but let’s also consider that he threw 18 total innings, which is way too low of a sample size to judge anything (especially since it was in the Futures League, not even the actual KBO). I’d consider this very likely to be a bullpen game for Lotte, but their bullpen isn’t all that good, and I think the Dinos will be putting baserunners on throughout the course of the game. I’d be pretty surprised to see NC score less than 4-5, with the potential for more if things get ugly early. I wish there was more to say about the pitching here, but without any idea what Lotte’s plan is, it’s hard to get a read, other than that they absolutely will not be putting anyone on the mound who the Dinos can’t get to if the bats are working.