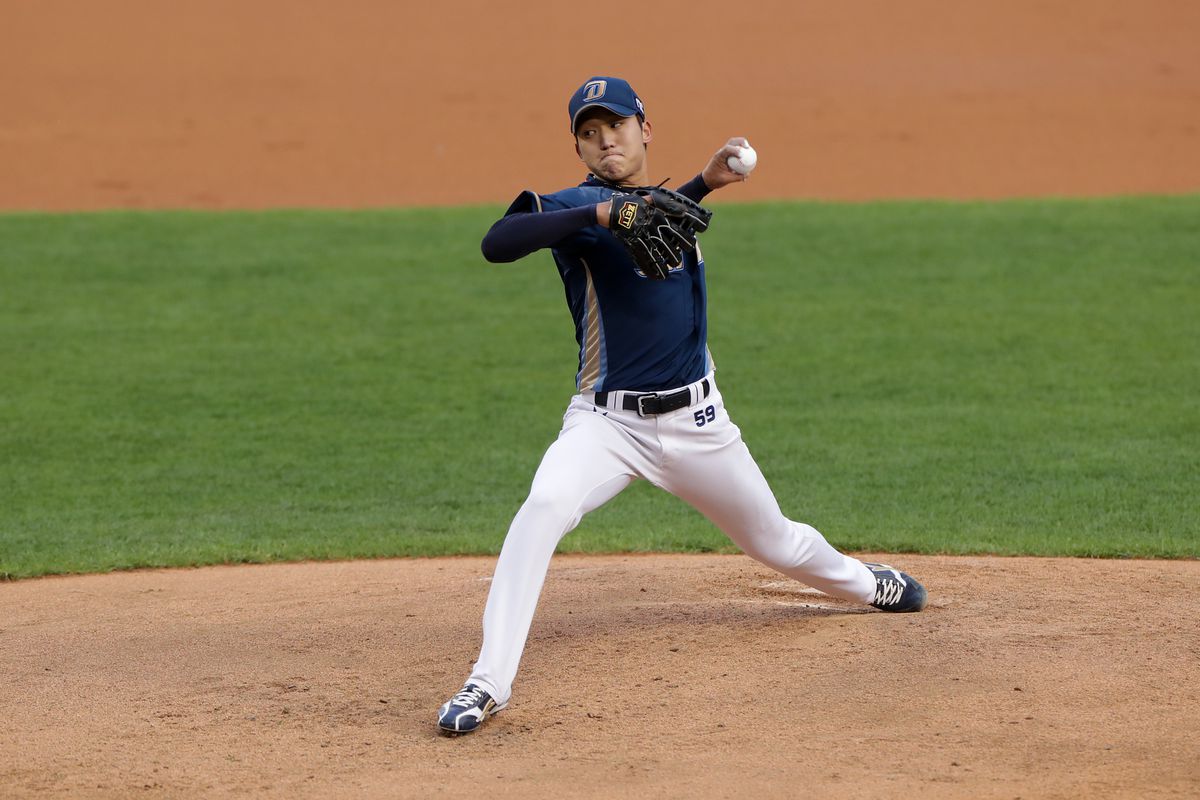 IMMEDIATE DISCLAIMER – THIS IS THE MOST FULL CARD I WILL LIKELY EVER PUBLISH, AND I DO NOT RECOMMEND BETTING EVERY SINGLE PLAY ON HERE. THESE ARE THE PLAYS I PERSONALLY AM MAKING, AND AM COMFORTABLE DOING SO BECAUSE THEY DIVERSIFY ACROSS FIVE DIFFERENT GAMES, BUT BANKROLL MANAGEMENT IS CRUCIAL, AND IF YOU ARE RISK-AVERSE IN ANY WAY OR JUST PREFER NOT TO HAVE AS MUCH MONEY OUTSTANDING, DO NOT FOLLOW EVERY PLAY ON THIS CARD. PICK AND CHOOSE WHERE YOU LIKE, OR REACH OUT TO ASK ME QUESTIONS INDIVIDUALLY. THANK YOU.

We start tonight with not only one of my favorite pitchers on the slate, but the pitcher with by far the best matchup. Im, who ranks 2nd in the league in hard-hit ball % (12.1, just 0.1 behind leader and teammate Aaron Brooks), 6th in FIP, and 7th in ERA, has the tremendous opportunity to face a team that ranks last (by a pretty considerable margin) in almost every possible hitting category. To put it simply, this is a match made in heaven. Im hasn’t allowed more than 2 ER in any of his last four starts, and just once in his seven (3 against KT on May 27th). He’s only given up 2 HR the entire season, both of which came in the same outing. Furthermore, his command is practically impeccable, with a 1.45 BB/9 that ranks 2nd in the KBO, just behind Kiwoom ace Eric Jokisch. This is a guy who’s analytically sound and passes the eye test, with stuff that produces enough strikeouts to be high-end in a contact league. I like Im in any matchup, but Hanwha is just so bad, and anyone who thinks otherwise is being swayed by a tiny sample size of recent “success” that they’ve had, which came against some of the worst pitching in the KBO (and a 9-run explosion in a game in the midst of a torrential downpour). Color me completely unconvinced. I’d be shocked to see Im allow more than one run tonight, and I don’t see Hanhwa scoring more than two as a whole. Kia’s bullpen has been spotty at times, but it’s still one of the best in the KBO, so Im will have some nice backup after he exits. This is also a terrific spot for any DFS players – he’s an absolute no-doubter in your starter spot. Lock Im in for 6-7 IP, less than 2 ER, and an extremely quality outing.

Jang is the exact opposite of Im in that he’s practically a model of inconsistency. His last start was dreamlike, striking out 9 over 5 IP with 1 ER, but in his prior 20 IP he had allowed 20 ER. Not ideal. In an appearance vs Kia earlier this year, Jang had perhaps the worst control outing of the KBO season, walking six batters and giving up 7 hits en route to 3 ER (4 runs total). His control is absolutely awful, as he’s walked less than 2 batters in an outing exactly once this season and has walked 3 or more in five of his eight outings. This is extremely concerning against the Kia offense – if you recall my prior writeups, this is an offense I fade against control, and stack against a lack thereof. The Tigers don’t have a ton of depth in the bottom of their order, but they have some mashers at the top (including two terrific lefties), and they have consistently hit better as a team against righties than lefties this season (.294 AVG/.434 SLG against righties, .228 AVG/.387 SLG vs lefties). This is an ideal matchup for them in that they’ll have a chance to score some runs early and give Im a lead that he should have no trouble protecting. I don’t necessarily expect Kia to score 7+, because they don’t really have the firepower for it, but I have their magic number at 5. If they get there, consider it a cover.

Indulge me momentarily as I hail the return of the king, and explain to you why his last outing – 4 ER in 4 IP against KT – should mostly be discarded as null and void. He was pitching on the back end of a doubleheader (something most aces don’t ever even do), and had been sitting in the dugout for at least 7 hours before having to get warmed up and start, not even on his own timing. The result was his only outing of the year of more than 1 ER, and let me tell you how considered I am: NOT AT ALL. Before this outing, Koo’s stats read as the following:

That is simply videogame like. This includes starts against Doosan (twice), KT, and Kiwoom (twice), so it’s not like he’s scraped by against subpar competition. Koo checks every box you could possibly look for in any arm, whether KBO or MLB. He passes the eye test as a 23-year-old lefthander sitting 90-93 with good offspeed and elite command. His analytics check out, as he sports an absolutely elite 2.42 FIP and ranks 6th in the KBO in hard contact rate, supporting the suface level stats we see above. Now, he faces a Lotte offense that may have scored 10 runs last night, but had averaged just over 3/game in the last five before that against pitching ranging from subpar to decent. If anything, this is the perfect fade-Lotte time. They’re coming off a big extra-inning win last night and starting one of the worst pitchers on a KBO roster, so its very possible multiple starters aren’t in the lineup in a game that’s most likely being chalked up as a loss already. Even if the normal lineup comes trotting out, I couldn’t be less concerned. Pitching at home, where has allowed exactly 3 ER over his last 29 innings pitched, I’m dubbing this the Chang-mo Koo Revenge Game. There will be some weary legs coming off yesterday, and I’d be surprised to see Koo give up anything more than 2 ER and go anything less than 7 IP.

It’s not an exaggeration to say Jang literally might be the worst pitcher in the KBO. He’s 37 years old and has spent most of this season in the minors, making his only appearance in a start against Doosan and getting obliterated over 3 innings. He hasn’t had an ERA below 5.61 since 2015, and his FIP hasn’t dipped below 4.58 in since 2012, suggesting that this sustained period of failure is not an accident. In his prime, Jang was actually an elite KBO arm, but the last time he possessed anything resembling that form was around 2009. It’s exceedingly clear that he’s making an emergency start today, and if you recall, Lotte used an obscene EIGHT RELIEVERS last night. EIGHT!!! They’re going to be absolutely shot on arms, and if I had to guess, Jang is going to be the sacrificial lamb. If things start off badly, I literally would not be surprised to see him suffer on the mound for 100+ pitches and just watch Dinos circle the bases. The key is getting going early – if the Dinos establish some offensive sentiment quickly, they could realistically score 10 runs or more, and my somewhat bold prediction is the last Lotte arm in this game is a position player after they run out of available pitching (is there a line for that?). Win or lose, this is the kind of game where you simply have to roll with the team that has the best starter in the KBO, the best offense in the KBO, is playing at home, and is facing arguably the worst pitcher in the KBO coupled with a bottom-three offense in the league.

Believe it or not, but I’m about to side with another pitcher on the road against Doosan. I’m just absolutely convinced that Han is a better pitcher than the 4.38 ERA indicates, and the last couple years of his career (where he’s typically sat in the 3s and low 4s in FIP), coupled with a really good 3.71 FIP this year, tells me I may be onto something. Han has allowed 61 hits in 51.1 IP, but of those, only six have been extra base hits, including just two home runs. This lines up almost perfectly with his 2019, where it was practically impossible for him to give up home runs, and he pitched to the tune of a 3.41 ERA / 3.30 FIP, ranking as one of the best starters in the KBO. Honestly, after the start to his season, I could understand giving up on him; he gave up 15 ER in his first 22.1 IP, and things looked like they were steadily heading downhill. But over the next 24 IP – including starts against NC and LG twice – Han has looked like a practically different human being, putting up 24 IP / 3.00 ERA / 1.16 WHIP / 18 K / 3 BB. That being said, tonight is going to be the toughest matchup out of any of those starts – Doosan is absolutely loaded with lefties and has torched pitching on the road (outside of their massive home ballpark). I wouldn’t be shocked to see them get to Han in pieces, but at the same time, this guy hasn’t allowed a home run since May 21st and has looked like an entirely different pitcher over the last five starts. This will be an interesting test for both pitcher and hitter – I personally believe that Han has the ability to limit Doosan to 2-4 runs over 6 IP tonight, which would set up perfectly for Kiwoom to work matchups the rest of the way. On the other hand, if Doosan knocks him out early, they could put up 5+ runs as well. I’m leaning towards the former being the case, and just like last night, placing in my faith in the Heroes pitching staff.

You may be asking me why I’ve given the benefit of the doubt to one pitcher with a great 2019 and subpar 2020 and I’m about to attack the other. Well, the answer lies in the details, where it’s exceedingly clear that something is wrong with Lee. He started the season well, with just 3 ER over his first 11.1 IP, and since then has proceeded to give up 4 or more ER in his next five out of seven starts, including 6 to Samsung, 7 to NC, 7 to LG, and 4 to SK, the latter three all occurring consecutively in the starts prior to this one. Whether the significant falloff lies in his command – he’s dropped from an already ugly 3.36 BB/9 to a horrendous 4.99 – or more hard-hit balls (17 XBH in 48 IP, on pace to double his XBH number from last year), something is going on here, and against a Kiwoom team that’s been torching bad pitching, I don’t expect him to make many positive strides. He hardly ever strikes anyone out, so Kiwoom will have the power to swing away without many restrictions and not have to worry about swing-and-miss stuff. The Heroes are making a surge for the top of the leaderboard, and actually led the KBO in wins in June, and I’m guessing hitters eyes are lighting up when they see what’s on the slate tonight, particularly after Doosan had to run through three relievers last night and further compound their bullpen issues. While it’s possible that Lee regains his 2019 form out of nowhere, I’m leaning towards that being mostly an outlier, considering his FIP was a less-than-stellar 3.96, following years of 6.75 and 5.46. The number of hitters he walks is going to be problematic tonight, and if Kiwoom can come up with a big hit or two, they can run away with this game.