We have the second major of this year at the Ocean Course at Kiaweh Island for the PGA Championship. We are nearing the half-way mark of the season and we have plenty of bets and picks this week for the BetKarma community! The name “Ocean Course” is a little misleading as water only comes into play on a few holes on the back nine of the course. Being able to gain strokes off the tee and hit fairways will be big this week as the course has been lengthened to about 7,900 yards. These golfers don’t want to be hitting approach shots from 200+ out of the rough and limit their scoring opportunities on these long Par 4s. Seven of the Par 4s measure 450+ yards so proximity and strokes gained on Par 4s will also be critical this week. Just a quick note—the 2012 PGA Championship was played here at the Ocean Course where Rory McIlroy won by eight strokes at 13-under par. 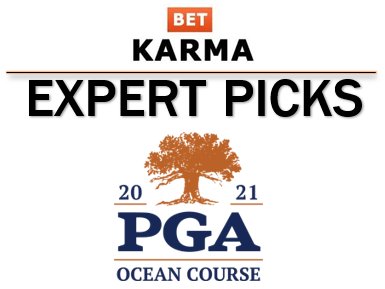 Sam and I both agree on our favorite outright bet: Daniel Berger. Berger has the great all-around game that you want when competing at a major event. I watched almost every minute of the final two rounds of the Byron Nelson last week and hardly noticed his quiet T-3 finish. In great recent form, has already won this year, and has eight Top 20 finishes dating back to December including a T-3, T-13, T-18, and T-9 in four of his last five starts. He ranks fourth in my model this week including ranking third in SG OTT, seventh in Bogey Avoidance, and nineteenth in SG Approach. He has consistent game and can find success off of the tee that should translate to a strong performance.

Conners is a statistical beast when you are looking for a golfer that can strike the ball and find success on approach. Conners ranks first in my model this week. He ranks eighth in SG OTT, third in SG Approach and Par 4 scoring from 450-500 yards, and fifth in Bogey Avoidance. He also has three Top 15 finishes in his last five starts including a Top 10 at the only other major played so far this season at Augusta as well as a seventh place finish at The Players—the two biggest tournaments and stages so far this season.