This week’s tournament at the Wyndham Championship marks the regular season finale before the FedEx Cup Playoffs begin next week. This tournament is notorious for sporting a relatively week field, however, there are some big names playing this week and plenty of storylines as players try to garner as many FedEx Cup points as possible in order to qualify for the Northern Trust next week. The top 125 golfers will play next week. A few big names are currently on the outside looking in including: Rickie Fowler, Justin Rose, Tommy Fleetwood, and Francesco Molinari. Other big names are just barely inside the top 125 including Matt Kuchar and Adam Scott. You will see plenty of graphics this week showing live FedEx Cup rankings as golfers complete each hole and how they shift up and down the leaderboard. It is always an exciting narrative to watch and track over the weekend and late into Sunday.

When you think of the Wyndham Championship, you think of Webb Simpson. He has eight Top 10 finishes including a win in 2011, runner up finishes 2018 and 2019, and third place finishes in 2017 and 2020. It’s too bad we can’t bet on the over/under of how many times the commentators will mention the fact that Webb named his daughter Wyndham after his win in 2011 (I’d take the over). Another golfer and storyline to look at will be the red hot Louis Oosthuizen. He reportedly skipped the Olympics in order to prepare for the FedEx Cup and a run at the $15 million prize. He has never played here at Sedgefield but it shouldn’t matter too much considering the lower difficulty of the course and the his caliber as a golfer.

Sedgefield is a Donald Ross design and has played host to the Wyndham Championship since 2008. Weather should not play a factor this week as it looks like prime golf weather this week. I would expect the winning score to mirror previous winning scores of at least 21 under par. The front nine will yield plenty of birdies this week and should get golfers off to some quick starts as most holes havea  scoring average of under par. The back nine may play a bit more difficult but birdies will be plentiful all week long regardless of the hole. Scoring on Par 4s will be crucial on this Par 70 course but, despite only two Par 5s, scoring and taking advantage of the Par 5s will also be important. You will see plenty of birdies and even quite a few eagles on these easy Par 5s. Not converting on the Par 5s means leaving a potential 2-4 strokes on the table each round which would not bode well for success when the winner will finish at 20 under or better. 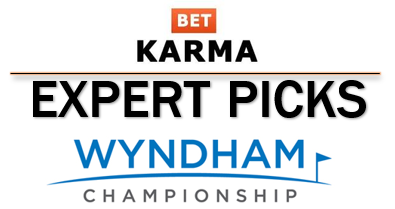 Henley has been logging some great finishes recently other than a missed cut at The Open. He had a T-11 at the John Deere, T-19 at the Travelers, and a T-13 at the US Open. Henley also had a T-9 at the Wyndham last year and I expect him to build on that this year and post a great finish this week. I like Henley’s ability to hit fairways which will lead to easier approach shots. SG Approach is a key stat this week (like most weeks) as well as Proximity from 150-175. Henley ranks seventh and second in the field in both of these categories, respectively. He ranks 15th in my model overall—I like Henley to win this week.

Ryan Armour ranks fourth in my model this week including ranking fifth in SG Par from 400-450 and Top 30 in every other key stat this week. He has also finished T-6 and T-5 in his last two starts at the 3M and Barbasol. Armour also has two Top 10 finishes here in 2017 and 2018 as well as two other Top 25 finishes in 2019 and 2020. He has the course history, recent performance, and key stats all going for him this week.