We narrowly missed a Russell Henley outright win last week as he finished one shot off the lead after missing a couple of extremely short par saves that proved to be costly. The Wyndham marked the end of the regular season so we are back at it this week for the first week of the FedEx Cup Playoffs!

The top 125 golfers in FedEx Cup points tee it up this week with downtown New York in the backdrop at the Northern Trust at Liberty National Golf Course in Jersey City, New Jersey. Next week the top 70 in FedEx Cup points will participate in the BMW Championship so finishing positions and accumulating as many points this week will be crucial. Look for golfers to be aggressive and trying to solidify their current position to qualify for next week.

Liberty National Golf Course is a Par 71 playing over 7,400 yards. Seven of the eleven Par 4s will play over 450 yards so scoring on these longer Par 4s will be important as well as proximity to the hole on approach shots that will come from 200+ yards on many of these holes. Approach and proximity will be important as Liberty National sports smaller than average greens. Depending on the weather, wind can come into play as the course is exposed to the Hudson and can lead some shots astray into the water hazards that surround the course. The Par 5s are not difficult and historically have been the easiest holes on the course. Gaining 3-4 strokes on these each day will be critical to offset any higher scores on the difficult Par 4s. The signature hole this week will be the Par 3 15th hole that has New York City in the background. The 15th hole will also play around 150 yards which means these golfers will be attacking this hole straight on with nothing more than a pitching wedge so expect to see some exciting shots with a great view here. 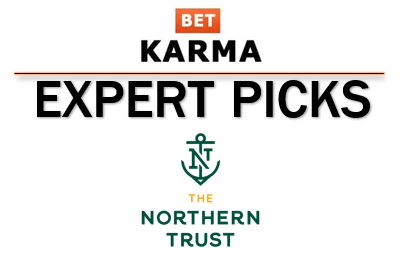 Just like in major championships, these FedEx Cup Playoff events are going to bring out the best in the best golfers. In recent history, except for Brooks Koepka, no one has done this better than Collin Morikawa. He already has two major championships to his name including The Open win last month. He also had a T-4 at the US Open in June, a second place finish at Memorial the week before, a T-8 at the PGA Championship, and then back-to-back Top 20s at the Masters and RBC following his win at the WGC Workday at Concession. He has nine Top 10 finishes in the 2021 calendar year leading into the playoffs this week. He ranks third in my model and is currently first in strokes gained on the field in T2G, Approach, and Ball Striking

This is my first time writing on English this year and it is long overdue. He has three Top 5 finishes in his last four starts and is one of the hottest golfers right now. The fourth place finish at the WGC St. Jude was almost a victory for him before falling apart on the back nine, which could potentially be attributed to being put on the clock for much of the round being paired with Bryson. Nevertheless, English ranks seventh in my model this week and ranks inside the Top 30 on every statistical category that I am targeting this week. Take those stats with his form right now and there is no reason he can’t post a Top 10 finish here this week.

Hatton was not the first guy that came to my mind when I was preparing for this week but his stats are outstanding as far as a course fit for Liberty National this week. I ran two models and he ranked first in one and second in the other. He had a T-17 at WGC St. Jude and has finished inside the Top 25 in two of the last three iterations of the Northern Trust. I do wish that his form was a little better recently and that he could win in the States, but at these odds I am willing to take a risk on a guy that, at least on paper, looks to be a great course fit.